498. The future participle (except futūrus and ventūrus) is rarely used in simple agreement with a noun, except by poets and later writers.

a. The future participle is chiefly used with the forms of esse (often omitted in the infinitive) in the active periphrastic conjugation (see § 195).

Morere, Diagorā, nōn enim in caelum adscēnsūrus es. (Tusc. 1.111)
Die, Diagoras, for you are not likely to rise to heaven.

neque petītūrus umquam cōnsulātum vidērētur (Off. 3.79)
And he did not seem likely ever to be a candidate for the consulship.

b. With the past tenses of esse in the indicative, the future participle is often equivalent to the pluperfect subjunctive (§ 517.d). For futūrum fuisse, see § 589.b.

499. By later writers and the poets the future participle is often used in simple agreement with a substantive to express— 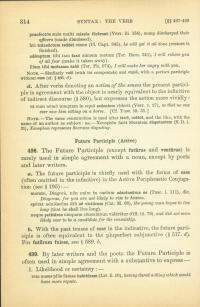 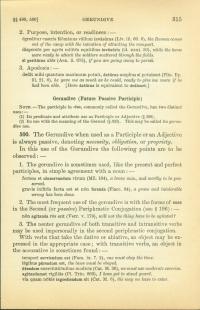