209.There are about 360 simple verbs of the 1st Conjugation, most of them formed directly on a noun or adjective stem.

Their conjugation is usually regular, like amō; though of many only a few forms are found in use.

a. The following verbs form their perfect and supine stems irregularly. Those marked * also have regular forms.

Note— Compounds of these verbs have the following forms.

210. There are nearly 120 simple verbs of the 2nd Conjugation, most of them denominative verbs of condition, having a corresponding noun and adjective from the same root, and an inceptive in -scō (§ 263.1).

a. Most verbs of the 2nd conjugation are inflected like moneō, but many lack the supine (as, arceō ward off; careō lack; egeō need; timeō fear), and a number have neither perfect nor supine (as, maereō be sad).

b. The following keep ē in all the systems.

1. Future participle also in -ātūrus (either in the simple verb or in composition).

3. And other compounds of -pleō 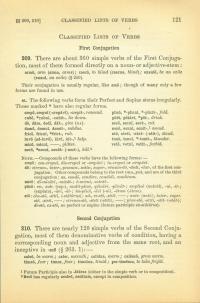 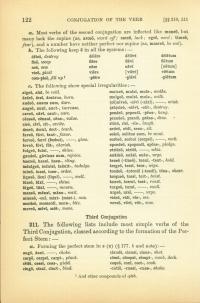