408. Means, instrument, manner, and accompaniment are denoted by the instrumental ablative (see § 398), but some of these uses more commonly require a preposition. As they all come from one source (the old instrumental case) no sharp line can be drawn between them, and indeed the Romans themselves can hardly have thought of any distinction. Thus, in Omnibus precibus ōrābant, (They entreated with every [kind of] prayer) the ablative, properly that of means, cannot be distinguished from that of manner.

409. The ablative is used to denote the means or instrument of an action.

Multae istārum arborum meā manū sunt satae.
(Cat. M. 59)
Many of those trees were set out with my own hands.

a. The Ablative of Means is used with verbs and adjectives of filling, abounding, and the like.

Note— In poetry the genitive is often used with these words. Compleō and impleō sometimes take the genitive in prose (cf. § 356); so regularly plēnus and (with personal nouns) complētus and refertus (§ 349.a).

Convīvium vīcīnōrum compleō. (Cat. M. 46, in the mouth of Cato)
I fill up the banquet with my neighbors.

Note— This is properly an Ablative of Means (instrumental) and the verbs are really in the middle voice (§ 156.a). Thus ūtor with the ablative signifies I employ myself (or avail myself) by means of, etc. But these earlier meanings disappeared from the language, leaving the construction as we find it.

a. Potior sometimes takes the genitive, as always in the phrase potīri rērum (to get control or be master of affairs; § 357.a).

Note 1— In early Latin, these verbs are sometimes transitive and take the accusative.

Note 2— The gerundive of these verbs is used personally in the passive as if the verb were transitive (but cf. § 500.3).

Hēracliō omnia ūtenda ac possidenda trādiderat. (Verr. 2.46)
He had given over everything to Heraclius for his use and possession.
(to be used and possessed)

Magistrātibus opus est. (Leg. 3.5)
There is need of magistrates.

Note— The ablative with ūsus is not common in classic prose.

a. With opus the ablative of a perfect participle is often found, either agreeing with a noun or used as a neuter abstract noun.

Opus est tuā exprōmptā malitiā atque astūtiā.
(Ter. And. 723)
I must have your best cunning and cleverness set to work.

Properātō opus erat (cf. Mil. 49)
There was need of haste.

Note 1— So rarely with ūsus in comedy.

Note 2— The omission of the noun gives rise to complex constructions.

b. Opus is often found in the predicate, with the thing needed in the nominative as subject.

sī quid ipsī opus esset (B. G. 1.34)
if he himself wanted anything
(if anything should be necessary for him).

2. This construction is properly an instrumental one, in which opus and ūsus mean work and service, and the ablative expresses that with which the work is performed or the service rendered. The noun ūsus follows the analogy of the verb ūtor, and the Ablative with opus est appears to be an extension of that with ūsus est. 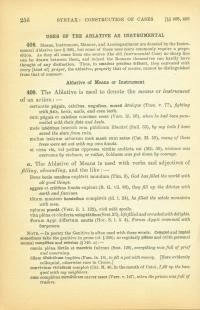 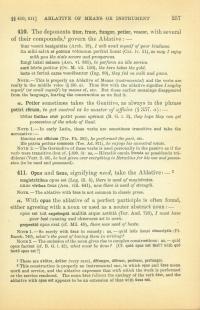 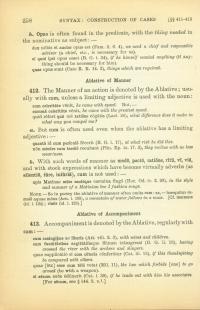