406. The comparative degree is often followed by the ablative1 signifying than.

407. The comparative may be followed by quam (than). When quam is used, the two things compared are put in the same case.

a. The construction with quam is required when the first of the things compared is not in the nominative or accusative.

Note 1— There are several limitations on the use of the Ablative of Comparison even when the first of the things compared is in the nominative or accusative. Thus the quam construction is regularly used (1) when the comparative is in agreement with a genitive, dative, or ablative.

Senex est eō meliōre condiciōne quam adulēscēns. (Cat. M. 68)
An old man is in this respect in a better position than a young man.

And (2) when the second member of the comparison is modified by a clause.

Minor fuit aliquantō is quī prīmus fābulam dedit quam eī quī, etc. (Brut. 73)
He who first presented a play was somewhat younger than those who, etc.

Note 2— The poets sometimes use the Ablative of Comparison where the prose construction requires quam.

Note 3— Relative pronouns having a definite antecedent never take quam in this construction, but always the ablative

b. In sentences expressing or implying a general negative the ablative (rather than quam) is the regular construction when the first member of the comparison is in the nominative or accusative.

c. After the comparatives plūs, minus, amplius, longius, without quam, a word of measure or number is often used with no change in its case.

Aditus in lātitūdinem nōn amplius ducentōrum pedum relinquēbātur. (id. 2.29)
An approach of not more than two hundred feet in width was left. [Genitive of Measure: § 345.b]

Note— The noun takes the case required by the context, without reference to the comparative, which is in a sort of apposition: “seven hundred were taken [and] more.”

d. Alius is sometimes followed by the ablative in poetic and colloquial use; in formal prose it is followed by ac (atque), et, more rarely by nisi, quam.

Num aliud vidētur esse ac meōrum bonōrum dīreptiō? (Dom. 51)
Does it seem anything different from the plundering of my property?

Erat historia nihil aliud nisi annālium cōnfectiō. (De Or. 2.52)
History was nothing else but a compiling of records.

e. The comparative of an adverb is usually followed by quam, rarely by the ablative except in poetry.

Note— Prepositions meaning before or beyond (as ante, prae, praeter, suprā) are sometimes used with a comparative.

1. This is a branch of the Ablative of Separation. The object with which anything is compared is the starting-point from which we reckon. Thus, “Cicero is eloquent”; but, starting from him we come to Cato, who is “more so than he.” 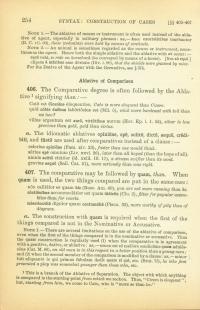 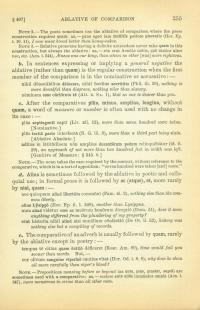