Agreement of Verb and Subject

316. A finite verb agrees with its subject in number and person.

Silent lēgēs inter arma. (Mil. 11)
The laws are silent in time of war.

Note— In verb forms containing a participle, the participle agrees with the subject in gender and number (§ 286).

The plea was delivered.

a. A verb having a relative as its subject takes the person of the expressed or implied antecedent.

Vidēte quam dēspiciāmur omnēs quī sumus ē mūnicipiīs. (Phil. 3.15)
See how all of us are scorned who are from the free towns.

b. A verb sometimes agrees in number (and a participle in the verb form in number and gender) with an appositive or predicate noun.

317. Two or more singular subjects take a verb in the plural.

Sī tū et Tullia valētis ego et Cicerō valēmus (Fam. 14.5)
If you and Tullia are well, Cicero and I are well.
[Notice that the 1st person is also first in order, not last, as by courtesy in English.]

Note— In case of different genders a participle in a verb-form follows the rule for predicate adjectives (see § 287.2-4).

b. If the subjects are connected by disjunctives (§ 223.a), or if they are considered as a single whole, the verb is usually singular.

BUT
Neque Caesar neque ego habitī essēmus. (id. 11.20)
Neither Cæsar nor I should have been considered.

Fāma et vīta innocentis dēfenditur. (Rosc. Am. 15)
The reputation and life of an innocent man are defended.

Est in eō virtūs et probitās et summum officium summaque observantia. (Fam. 13.28 A. 2)
In him are to be found worth, uprightness, the highest sense of duty, and the greatest devotion.

Note— So almost always when the subjects are abstract nouns.

c. When a verb belongs to two or more subjects separately, it often agrees with one and is understood with the others.

Hōc mihi et Peripatēticī et vetus Acadēmia concēdit. (Acad. 2.113)
This both the Peripatetic philosophers and the Old Academy grant me.

d. A collective noun commonly takes a verb in the singular; but the plural is often found with collective nouns when individuals are thought of (§ 280.a).

Note 1— The point of view may change in the course of a sentence.

Note 2— The singular of a noun regularly denoting an individual is sometimes used collectively to denote a group.

e. Quisque (each) and ūnus quisque every single one, have very often a plural verb, but may be considered as in partitive apposition with a plural subject implied (cf. § 282.a).

Sibi quisque habeant quod suum est. (Pl. Curc. 180)
Let every one keep his own. (Let them keep every man his own.)

Omission of Subject or Verb

318. The subject of the verb is sometimes omitted.

a. A Personal pronoun, as subject, is usually omitted unless emphatic.

BUT
Ego loquor.
It is I that speak.

b. An indefinite subject is often omitted.

Crēderēs.
You would have supposed.

c. A passive verb is often used impersonally without a subject expressed or understood (§ 208.d).

319. The verb is sometimes omitted.

a. Dīcō, faciō, agō, and other common verbs are often omitted in familiar phrases.

Quōrsum haec [spectant]?
What does this aim at?

Quid multa?
What need of many words?
(Why should I say much?)

b. The copula sum is very commonly omitted in the present indicative and present infinitive, rarely (except by late authors) in the subjunctive.

Quid ergō? Audācissimus ego ex omnibus (Rosc. Am. 2)
What then? Am I the boldest of all?

Omnia praeclāra rāra (Lael. 79)
All the best things are rare.

Potest incidere saepe contentiō et comparātiō dē duōbus honestīs utrum honestius. (Off. 1.152)
There may often occur a comparison of two honorable actions, as to which is the more honorable.
[Here, if any copula were expressed, it would be sit, but the direct question would be complete without any.] 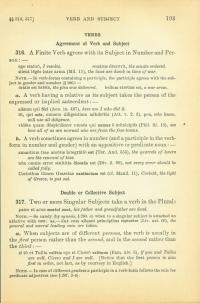 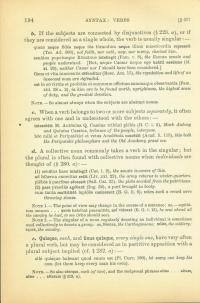 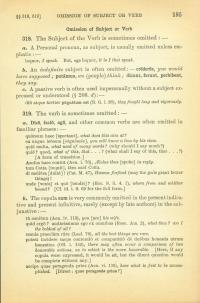