323. Copulative and disjunctive conjunctions connect similar constructions, and are regularly followed by the same case or mood that precedes them.

Hīs igitur quam physicīs potius crēdendum exīstimās? (Div. 2.37)
Do you think these are more to be trusted than the natural philosophers?

in mē quasi in tyrannum (Phil. 14.15)
against me as against a tyrant

b. Two or more coordinate words, phrases, or sentences are often put together without the use of conjunctions (Asyndeton, § 601.c).

c. 1. Where there are more than two coordinate words etc., a conjunction, if used, is ordinarily used with all (or all except the first).

3. The enclitic -que is sometimes used with the last member of a series, even when there is no grouping apparent.

d. Two adjectives belonging to the same noun are regularly connected by a conjunction.

f. Many adverbs are similarly used in pairs, as conjunctions, partly or wholly losing their adverbial force.

Simul grātiās agit, simul grātulātur. (Q. C. 6.7.15)
He thanks him and at the same time congratulates him.

a. Et (and) simply connects words or clauses; -que combines more closely into one connected whole. -que is always enclitic to the word connected or to the first or second of two or more words connected.

ferrō īgnīque
with fire and sword
[Not as separate things, but as the combined means of devastation.]

aquā et īgnī interdictus
forbidden the use of water and fire
[In a legal formula, where they are considered separately.]

b. Atque [(ac) and] adds with some emphasis or with some implied reflection on the word added. Hence it is often equivalent to and so, and yet, and besides, and then. But these distinctions depend very much upon the feeling of the speaker, and are often untranslatable.

omnia honesta atque inhonesta
everything honorable and dishonorable
(too, without the slightest distinction)

atque ego crēdō
and yet I believe (for my part)

c. Atque (ac), in the sense of as, than, is also used after words of comparison and likeness.

simul atque
as soon as

aequē ac tū
as much as you

Haud minus ac iussī faciunt.
They do just as they are ordered.

d. Sed and the more emphatic vērum or vērō (but) are used to introduce something in opposition to what precedes, especially after negatives (not this ... but something else). At (old form ast ) introduces with emphasis a new point in an argument, but is also used like the others; sometimes it means at least. At enim is almost always used to introduce a supposed objection which is presently to be overthrown. At is more rarely used alone in this sense.

Autem (however, now) is the weakest of the adversatives, and often marks a mere transition and has hardly any adversative force perceptible. Atquī (however, now) sometimes introduces an objection and sometimes a fresh step in the reasoning. Quod sī (but if, and if, now if) is used to continue an argument.

Note— Et, -que, and atque (ac) are sometimes used where the English idiom would suggest but, especially when a negative clause is followed by an affirmative clause continuing the same thought.

e. Aut (or) excludes the alternative; vel (an old imperative of volō) and -ve give a choice between two alternatives. But this distinction is not always observed.

Sed quis ego sumaut quae est in mē facultās (Lael. 17)
But who am I or what special capacity have I?
[Here vel could not be used, because in fact a negative is implied and both alternatives are excluded.]

Vīta tālis fuit vel fortūnā vel glōriā. (Lael. 12)
His life was such either in respect to fortune or fame.
(whichever way you look at it)

sī propinquōs habeant imbēcilliōrēs vel animō vel fortūnā (id. 70)
if they have relatives beneath them either in spirit or in fortune
(in either respect, for example, or in both)

aut deōrum aut rēgum fīliī (id. 70)
sons either of gods or of kings
[Here one case would exclude the other.]

implicātī vel ūsū diūturnō vel etiam officiīs (id. 85)
entangled either by close intimacy or even by obligations
[Here the second case might exclude the first.]

f. Sīve (seu) is properly used in disjunctive conditions (if either ... or if), but also with alternative words and clauses, especially with two names for the same thing.

sīve deae seu sint volucrēs (Aen. 3.262)
whether they (the Harpies) are goddesses or birds

g. Vel (even, for instance) is often used as an intensive particle with no alternative force.

h. Nam and namque (for) usually introduce a real reason, formally expressed, for a previous statement; enim (always postpositive), a less important explanatory circumstance put in by the way; etenim (for, you see; for, you know; for, mind you) and its negative neque enim introduce something self-evident or needing no proof.

(ea vīta) quae est sōla vīta nōminanda. Nam dum sumus inclūsī in hīs compāgibus corporis, mūnere quōdam necessitātis et gravī opere perfungimur; est enim animus caelestis, etc. (Cat. M. 77)
(that life) which alone deserves to be called life. For so long as we are confined by the body's frame, we perform a sort of necessary function and heavy task; for the soul is from heaven.

i. Ergō (therefore) is used of things proved formally, but often has a weakened force. Igitur (then, accordingly) is weaker than ergō and is used in passing from one stage of an argument to another. Itaque (therefore, accordingly, and so) is used in proofs or inferences from the nature of things rather than in formal logical proof. All of these are often used merely to resume a train of thought broken by a digression or parenthesis. Idcircō (for this reason, on this account) is regularly followed (or preceded) by a correlative (as, quia, quod, sī, ut, nē), and refers to the special point introduced by the correlative.

Malum mihi vidētur esse mors. Est miserum igitur, quoniam malum. Certē. Ergō et eī quibus ēvēnit iam ut morerentur et eī quibus ēventūrum est miserī. Mihi ita vidētur. Nēmō ergō nōn miser. (Tusc. 1.9.)
Death seems to me to be an evil. ‘It is wretched, then, since it is an evil.’ Certainly. ‘Therefore, all those who have already died and who are to die hereafter are wretched.’ So it appears to me. ‘There is no one, therefore, who is not wretched.’

k. Two conjunctions of similar meaning are often used together for the sake of emphasis or to bind a sentence more closely to what precedes.

at vērō
but in truth
but surely
still
however

1. That is, they do not stand first in their clause. 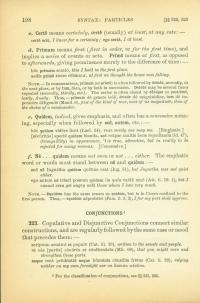 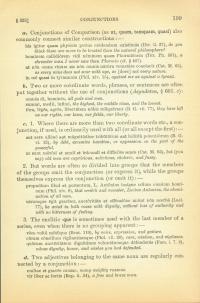 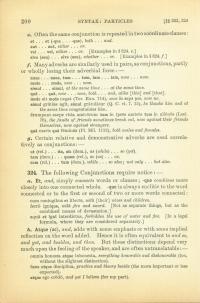 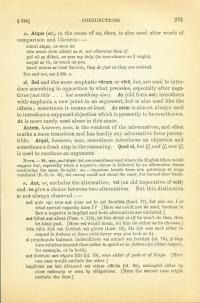 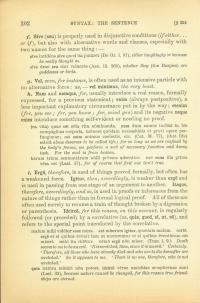 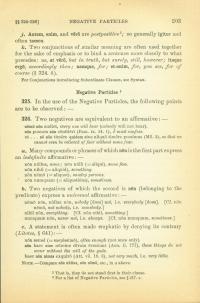