Even with this limitation the term is not quite precise (see § 567, footnote 1). The fact is rather that the clause and the leading verb are mutually complementary; each reinforces the other. The simplest and probably the earliest form of such sentences is to be found in the paratactic use (see § 268) of two verbs like volō abeās, dīcāmus cēnseō, adeam optimum est. From such verbs the usage spread by analogy to other verbs (see lists on § 563, footnote 1; § 568, footnote 2), and the complementary relation of the clause to the verb came to resemble the complementary force of the accusative, especially the accusative of cognate meaning (§ 390).

Note 1— Many ideas which in English take the form of an abstract noun may be rendered by a substantive clause in Latin. Thus, he demanded an investigation may be postulābat ut quaestiō habērētur. The common English expression for with the infinitive also corresponds to a Latin substantive clause.

Note 2— When a substantive clause is used as subject, the verb to which it is subject is called impersonal, and the sign of the construction in English is commonly the so-called expletive IT.

562. Substantive clauses are classified as follows.

Note— The Infinitive with subject accusative is not strictly a clause, but in Latin it has undergone so extensive a development that it may be so classed. The uses of the infinitive clause are of two kinds: (1) in constructions in which it replaces a subjunctive clause with ut etc.; (2) in the indirect discourse. The first class will be discussed in connection with the appropriate subjunctive constructions (§ 563); for indirect discourse, see § 579 ff. 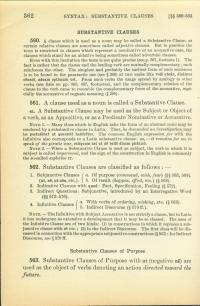