36. Declension is produced by adding terminations originally significant to different forms of stems, vowel or consonant. The various phonetic corruptions in the language have given rise to the several declensions. Most of the case endings, as given in Latin, contain also the final letter of the stem.

Adjectives are, in general, declined like nouns, and are etymologically to be classed with them; but they have several peculiarities of inflection (see § 109 ff.).

37. Nouns are inflected in five Declensions, distinguished by the final letter (characteristic) of the Stem, and by the case-ending of the Genitive Singular.

38. The following are General Rules of Declension:

a. The Vocative is always the same as the Nominative, except in the singular of nouns and adjectives of the 2nd declension ending in -us, which have -e in the Vocative.

b. In neuters the Nominative and Accusative are always alike, and end in -ă in the plural.

d. In the last three declensions (and in a few cases in the others) the Dative singular ends in -ī.

e. The Dative and Ablative plural are always alike.

g. Final -i, -o, and -u of inflection are always long; final -a is short, except in the Ablative singular of the 1st declension; final -e is long in the 1st and 5th declensions, short in the 2nd and 3rd. Final -is and -us are long in plural cases. 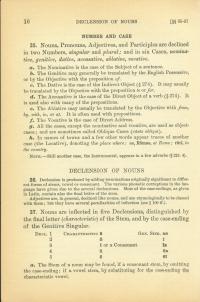 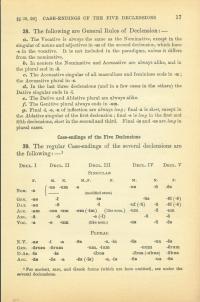