31. Names of Male beings, and of Rivers, Winds, Months, and Mountains, are masculine:

a. A few names of Rivers ending in -a (as, Allia), with the Greek names Lēthē and Styx, are feminine; others are variable or uncertain.

b. Some names of Mountains are feminine or neuter, taking the gender of their termination.

32. Names of Female beings, of Cities, Countries, Plants, Trees, and Gems, of many Animals (especially Birds), and of most abstract Qualities, are feminine.

a. Some names of Towns and Countries are masculine or neuter.

b. A few names of Plants and Gems follow the gender of their termination.

Note— The gender of most of the above may also be recognized by the terminations, according to the rules given under the several declensions. The names of Roman women were usually feminine adjectives denoting their gēns or house (see § 108.b).

33. Indeclinable nouns, infinitives, terms or phrases used as nouns, and words quoted merely for their form, are neuter.

34. Many nouns may be either masculine or feminine, according to the sex of the object. These are said to be of Common Gender.

Note— Several names of animals have a grammatical gender, independent of sex. These are called epicene. Thus lepus (hare) is always masculine, and vulpēs (fox) is always feminine. 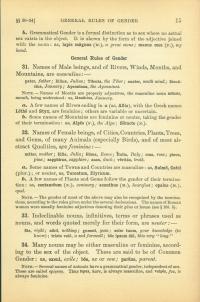