536. The subjunctive in consecutive clauses is a development of the use of that mood in clauses of characteristic (as explained in § 534).

537. Clauses of result take the subjunctive introduced by ut (so that)—negative, ut nōn—or by a relative pronoun or relative adverb.

multīs gravibusque vulneribus cōnfectus ut iam sē sustinēre non posset (B. G. 2.25)
used up with many severe wounds so that he could no longer stand.

Nēmō est tam senex quī sē annum nōn putet posse vīvere. (Cat. M. 24)
Nobody is so old as not to think that he can live a year.

Note— When the result implies an effect intended (not a simple purpose), ut nē or nē is sometimes used as being less positive than ut nōn.

b. Frequently a clause of result or characteristic is used in a restrictive sense, and so amounts to a proviso (cf. § 535.d).

Hōc ita est ūtile ut nē plānē inlūdāmur ab accūsātōribus. (Rosc. Am. 55)
This is so far useful that we are not utterly mocked by the accusers
(i.e. useful only on this condition, that, etc.).

Nihil autem est molestum quod nōn dēsīderēs. (Cat. M. 47)
But nothing is troublesome which (= provided that) you do not miss.

c. The clause of result is sometimes expressed in English by the infinitive with TO or SO AS TO or an equivalent.

Note— Result is never expressed by the infinitive in Latin except by the poets in a few passages (§ 461.a).

538. The constructions of purpose and result are precisely alike in the affirmative (except sometimes in tense sequence, § 485.c); but, in the negative, purpose takes nē, result ut nōn etc. 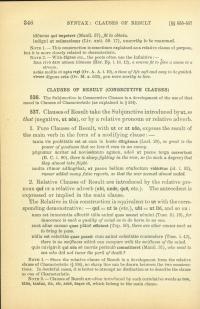 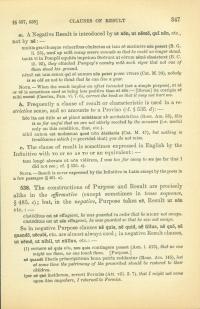 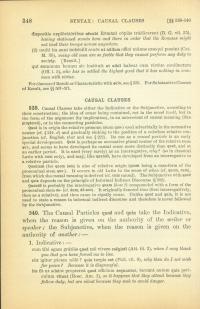