147. The Relative Pronoun quī (who, which) is declined as follows. 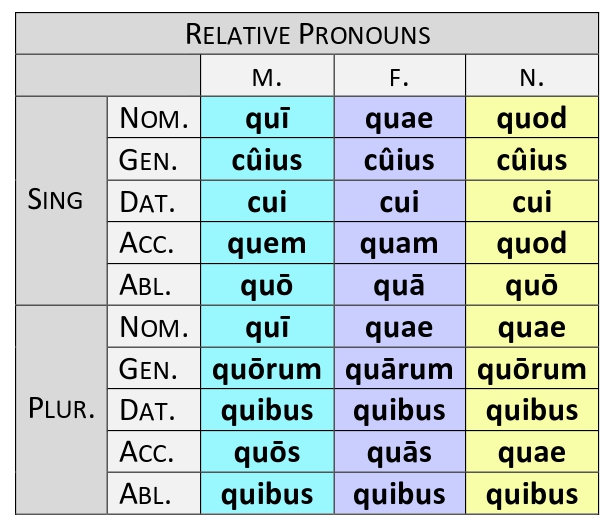 148. The Substantive Interrogative Pronoun quis (who?) quid (what?) is declined in the Singular as follows. 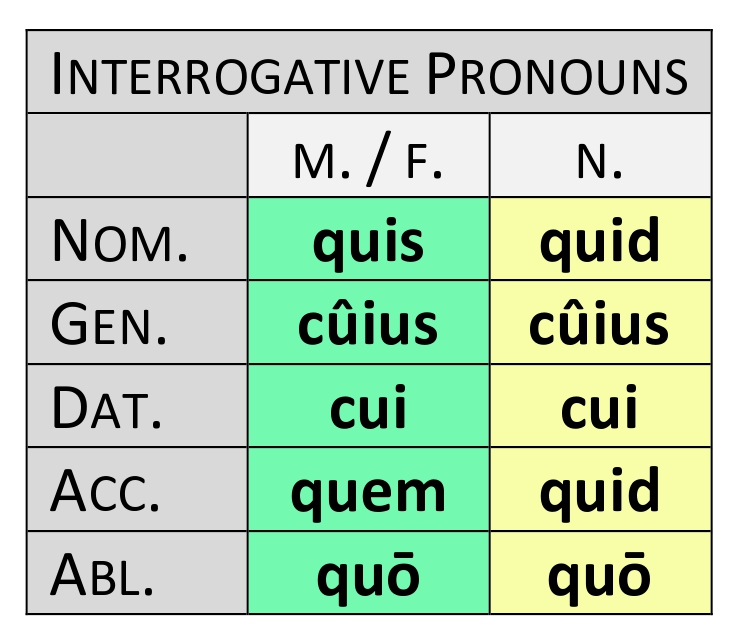 The Plural is the same as that of the Relative quī, quae, quae.

a. The singular quis is either masculine or of indeterminate gender, but in old writers it is sometimes distinctly feminine.

b. The Adjective Interrogative Pronoun quī, quae, quod (what kind of? what? which?) is declined throughout like the Relative.

Note— But quī is often used without any apparent adjective force; and quis is very common as an adjective, especially with words denoting a person.

Quī nōminat mē? Who calls my name?
Quis diēs fuit? What day was it?
Quis homō? What man?

But often
Quī homō? What kind of man?
Nesciō quī sīs. I know not who you are.

c. Quisnam (pray, who?) is an emphatic interrogative. It has both substantive and adjective forms like quis, quī.

149. The Indefinite Pronouns quis (any one) and quī (any) are declined like the corresponding Interrogatives, but qua is commonly used for quae except in the nominative plural feminine.

a. The feminine forms qua and quae are sometimes used substantively.

Note— After these particles quī is often used as a substantive and quis as an adjective (cf. § 148.b Note, above).

150. The Relative, Interrogative, and Indefinite Pronouns are originally of the same stem, and most of the forms are the same (compare § 147 with § 148, above). The stem has two forms in the masculine and neuter, quo-, qui-, and one for the feminine, quā-. The interrogative sense is doubtless the original one.

a. Old forms for the genitive and dative singular are quôius, quoi.

b. The form quī is used for the ablative of both numbers and all genders; but especially as an adverb (how, by which way, in any way), and in the combination quīcum (with whom), as an interrogative or an indefinite relative.

c. A nominative plural quēs (qui-) occurs in early Latin. A dative and ablative plural quīs (quo-) is found even in classic Latin.

151. The pronouns quis and quī appear in various combinations. The adverb -cumque (-cunque; cf. quisque) added to the relative makes an indefinite relative, which is declined like the simple word.

Note— This suffix, with the same meaning, may be used with any relative

a. In quisquis (whoever) both parts are declined, but the only forms commonly used are quisquis, quidquid (quicquid), and quōquō.

Note 1— Rare forms are quemquem and quibusquibus; an ablative quīquī is sometimes found in early Latin; the ablative feminine quāquā is both late and rare. Cuicui occurs as a genitive in the phrase cuicui modī (of whatever kind).Other cases are cited, but have no authority. In early Latin quisquis is occasionally feminine.

Note 2— Quisquis is usually substantive, except in the ablative quōquō, which is more commonly an adjective.

c. The indefinite pronouns quīdam [a certain (one)], quīvīs, quīlibet (any you please) are used both as substantives and as adjectives. The first part is declined like the relative quī, but the neuter has both quid- (substantive) and quod- (adjective).

d. The indefinite pronouns quispiam (some, any) and quisquam (any at all) are used both as substantives and as adjectives. Quispiam has feminine quaepiam (adjective), neuter quidpiam (substantive) and quodpiam (adjective); the plural is very rare. Quisquam is both masculine and feminine; the neuter is quidquam (quicquam), substantive only; there is no plural. Ūllus, -a, -um, is commonly used as the adjective corresponding to quisquam.

e. The indefinite pronoun aliquis (some one, substantive), aliquī (some, adjective), is declined like quis and quī, but aliqua is used instead of aliquae except in the nominative plural feminine.

Note— Aliquī is sometimes used substantively and aliquis as an adjective.

f. The indefinite pronoun ecquis (whether any one, substantive), ecquī (whether any, adjective), is declined like aliquis, but has either ecquae or ecqua in the nominative singular feminine of the adjective form.

Note— Ecquis (ecquī) has no genitive singular, and in the plural occurs in the nominative and accusative only.

g. The enclitic particle -que added to the interrogative gives a universal

quisque every one
uterque each of two, or both.

In the compound ūnusquisque (every single one) both parts are declined (genitive unīuscûiusque), and they are sometimes written separately and even separated by other words.

h. The relative and interrogative have rarely a possessive adjective cûius, -a, -um (whose; older quôius) and a patrial cûiās (cûiāt-), of what country.

i. Quantus (how great) quālis (of what sort) are derivative adjectives from the interrogative. They are either interrogative or relative, corresponding respectively to the demonstratives tantus, tālis (§ 152). Indefinite compounds are quantuscumque and quāliscumque (see § 151.a, above). 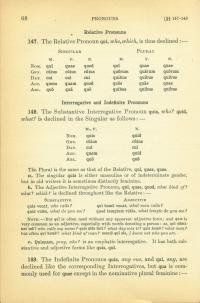 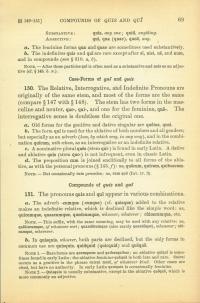 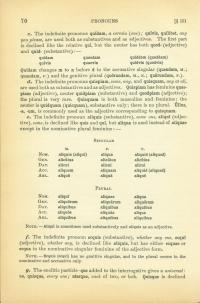 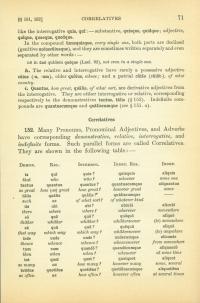