630. The Roman Year was designated, in earlier times, by the names of the Consuls; but was afterwards reckoned from the building of the City (ab urbe conditā, annō urbis conditae), the date of which was assigned by Varro to a period corresponding with B.C. 753. In order, therefore, to reduce Roman dates to those of the Christian era, the year of the city is to be subtracted from 754: e.g. A.U.C. 691 (the year of Cicero's consulship) corresponds to B.C. 63.

Before Cæsar's reform of the Calendar (B.C. 46), the Roman year consisted of 355 days: March, May, Quīntīlis (July), and October having each 31 days, February having 28, and each of the remainder 29. As this calendar year was too short for the solar year, the Romans, in alternate years, at the discretion of the pontificēs, inserted a month of varying length (mēnsis intercalāris) after February 23, and omitted the rest of February. The “Julian year,” by Cæsar's reformed Calendar, had 365 days, divided into months as at present. Every fourth year the 24th of February (VI. Kal. Mārt.) was counted twice, giving 29 days to that month: hence the year was called bissextīlis. The month Quīntīlis received the name Iūlius (July), in honor of Julius Cæsar; and Sextīlis was called Augustus (August), in honor of his successor. The Julian year (see below) remained unchanged till the adoption of the Gregorian Calendar (A.D. 1582), which omits leap-year three times in every four hundred years.

631. Dates, according to the Roman Calendar, are reckoned as follows.

a. The first day of the month was called Kalendae (Kalends).

Note— Kalendae is derived from calāre, to call—the Kalends being the day on which the pontiffs publicly announced the New Moon in the Comitia Calāta. This they did, originally, from actual observation.

b. On the fifteenth day of March, May, July, and October, but the thirteenth of the other months, were the Īdūs (Ides), the day of Full Moon.

c. On the seventh day of March, May, July, and October, but the fifth of the other months, were the Nōnae(Nones or ninths).

d. From the three points thus determined, the days of the month were reckoned backwards as so many days before the Nones, the Ides, or the Calends. The point of departure was, by Roman custom, counted in the reckoning, the second day being three days before, etc. This gives the following rule for determining the date:

If the given date is the Kalends, add two to the number of days in the month preceding; if Nones or Ides, add one to that of the day on which they fall, and from the number thus ascertained subtract the given date.

Note— The name of the month appears as an adjective in agreement with Kalendae, Nōnae, Īdūs.

e. The days of the Roman month by the Julian Calendar are given in the following table.

Note— Observe that a date before the Julian Reform (B.C. 46) is to be found not by the above table, but by taking the earlier reckoning of the number of days in the month. 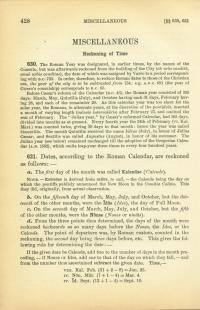 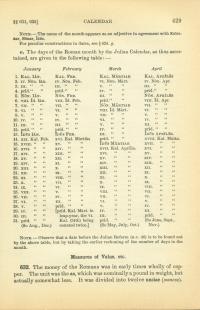