9. The Quantity of a Vowel or a Syllable is the time occupied in pronouncing it. Two degrees of Quantity are recognized—long and short.

a. In syllables, quantity is measured from the beginning of the vowel or diphthong to the end of the syllable.

10. Vowels are either long or short by nature, and are pronounced accordingly (§ 8).

a. A vowel before another vowel or h is short.

b. A diphthong is long.

So, also, a vowel derived from a diphthong.

c. A vowel formed by contraction is long.

Note— But the quantity of the vowel before gn is not certain in all cases.

In this book all vowels known to be long are marked (ā, ē, etc.), and short vowels are left unmarked (a, e, etc.). Vowels marked with both signs at once (ā̆, ē̆, etc.) occur sometimes as long and sometimes as short.

Note—  The Romans sometimes marked vowel length by a stroke above the letter (called an apex), as, Á; and sometimes the vowel was doubled to indicate length. An I made higher than the other letters was occasionally used for ī. But none of these devices came into general use

11. The Quantity of the Syllable is important for the position of the accent and in versification.

a. A syllable containing a long vowel or a diphthong is said to be long by nature.

b. A syllable containing a short vowel followed by two consonants (except a mute before l or r) or by a double consonant (x, z) is said to be long by position, but the vowel is pronounced short.

Note— When a consonant is doubled the pronunciation should show this distinctly. Thus in mit-tō both Ts should be pronounced as in out-talk (not merely a single t as in better).

c. A syllable containing a short vowel followed by a mute before l or r is properly short, but may be used as long in verse. Such a syllable is said to be common.

Note 1— In syllables long by position, but having a short vowel, the length is partly due to the first of the consonants, which stands in the same syllable with the vowel. In syllables of “common” quantity (as the first syllable of patrem) the ordinary pronunciation was pa-trem, but in verse pat-rem was allowed so that the syllable could become long.

Note 3— In rules for quantity h is not counted as a consonant, nor is the apparently consonantal u in qu, gu, su (see § 5, Note 2).

d. A syllable whose vowel is a, e, o, or u, followed by consonantal i, is long whether the vowel itself is long or short.

In such cases the length of the syllable is indicated in this book by a circumflex on the vowel.

Note— The length of a syllable before consonant i is due to a transitional sound (vowel i) which forms a diphthong with the preceding vowel.

e. In some compounds of iaciō (as, in-iciō) the consonantal i of the simple verb was probably pronounced (though not written). Thus the first syllable was long by position: in-iciō (for in-iiciō). See § 6.d. In such cases the length of the syllable is not indicated in this book by a circumflex on the vowel.

f. When a syllable is long by position the quantity of the vowel is not always determinable. The vowel should be pronounced short unless it is known to be long.

Note— The quantity of a vowel under these circumstances is said to be hidden. It is often determined with a greater or less degree of certainty by inscriptional evidence (see § 10, Note) or by other means. In this book, the quantity of all such vowels known to be long is marked. 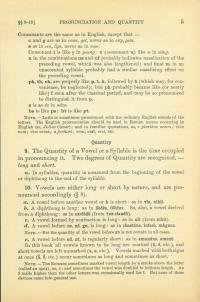 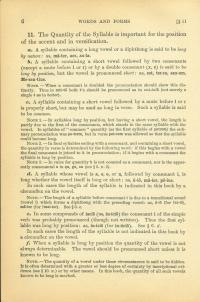