294. A pronoun indicates some person or thing without either naming or describing it. Pronouns are derived from a distinct class of roots, which seem to have denoted only ideas of place and direction (§ 228.2), and from which nouns or verbs can very rarely be formed. They may therefore stand for nouns when the person or thing, being already present to the senses or imagination, needs only to be pointed out, not named.

Some pronouns indicate the object in itself, without reference to its class, and have no distinction of gender. These are Personal Pronouns. They stand syntactically for nouns, and have the same construction as nouns. Other pronouns designate a particular object of a class, and take the gender of the individuals of that class. These are called Adjective Pronouns. They stand for adjectives, and have the same construction as adjectives. Others are used in both ways; and, though called adjective pronouns, may also be treated as personal, taking, however, the gender of the object indicated.

In accordance with their meanings and uses, Pronouns are classified as follows. 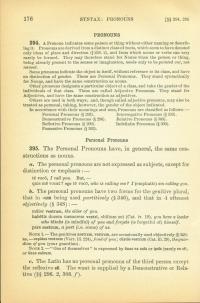