445. Of the two principal uses of the subjunctive in independent sentences (cf. § 436), the second, or Potential Subjunctive,1 is found in a variety of sentences whose common element is the fact that the mood represents the action as merely conceived or possible, not as desired (hortatory, optative) or real (indicative). Some of these uses are very old and may go back to the Indo-European parent speech, but no satisfactory connection between the Potential and the Hortatory and optative subjunctive has been traced. There is no single English equivalent for the Potential Subjunctive; the mood must be rendered, according to circumstances, by the auxiliaries would, should, may, might, can, or could.

446. The Potential Subjunctive is used to suggest an action as possible or conceivable. The negative is nōn. In this use the present and the perfect refer without distinction to the immediate future; the imperfect (occasionally the perfect) to past time; the pluperfect (which is rare) to what might have happened.

447. The Potential Subjunctive has the following uses:

a. Forsitan (perhaps) regularly takes the Potential Subjunctive except in later Latin and in poetry, where the indicative is also common.

Forsitan quaerātisquī iste terror sit. (Rosc. Am. 5)
You may perhaps inquire what this alarm is.

Note— The subjunctive clause with forsitan ( = fors sit an) was originally an indirect question: it would be a chance whether, etc.

b. Fortasse (perhaps) is regularly followed by the indicative; sometimes, however, by the subjunctive, but chiefly in later Latin.

1. The name Potential Subjunctive is not precisely descriptive, but is fixed in grammatical usage. 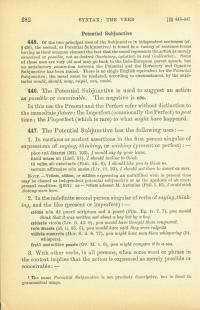 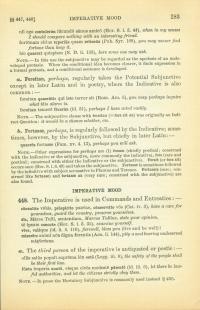