163. Verbs have regular terminations1 for each of the three Persons, both singular and plural, active and passive.2

a. The Perfect Indicative active has special terminations.3

b. The Imperative has the following terminations.

1. Most of these seem to be fragments of old pronouns, whose signification is thus added to that of the verb stem (cf. § 36). But the ending -minī in the 2nd person plural of the passive is perhaps a remnant of the participial form found in the Greek -μενος, and has supplanted the proper form, which does not appear in Latin. The personal ending -nt is probably connected with the participial nt- (Nominative -ns).

2. The Passive is an old Middle Voice, peculiar to the Italic and Celtic languages, and of uncertain origin. 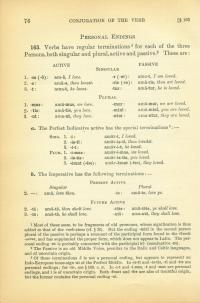 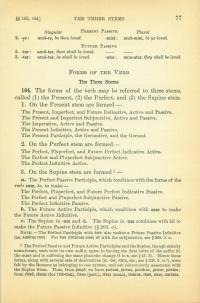