359. Peculiar Genitive constructions are the following.

a. A poetical genitive occurs rarely in exclamations, in imitation of the Greek (Genitive of Exclamation).

b. The genitive is often used with the ablatives causā, grātiā (for the sake of); ergō (because of); and the indeclinable īnstar (like); also with prīdiē (the day before) postrīdiē (the day after); tenus (as far as).

honōris causā
with due respect
(for the sake of honor)

equus īnstar montis (Aen. 2.15)
a horse huge as a mountain (the image of a mountain)

Note 1— Of these the genitive with causā is a development from the possessive genitive and resembles that in nōmen īnsāniae (§ 343.d). The others are of various origin.

Tacitus uses the construction with other words. 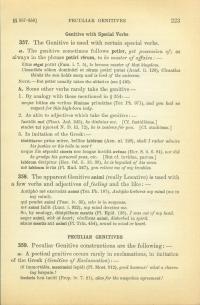 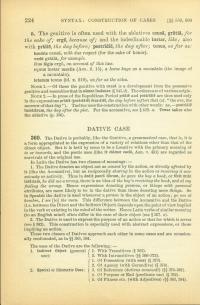