Valeant, valeant cīvēs meī; sintincolumēs. (Mil. 93)
Farewell, farewell to my fellow citizens; may they be secure from harm.

Dī facerent sine patre forem! (Ov. M. 8.72)
Would that the gods allowed me to be without a father!
(but they do not)

a. The perfect subjunctive in a wish is archaic.

Quod dī ōmen āverterint. (Phil. 12.14, in a religious formula)
And may the gods avert this omen.

442. The optative subjunctive is often preceded by the particle utinam; so regularly in the imperfect and pluperfect.

a. In poetry and old Latin utī or ut often introduces the optative subjunctive; and in poetry sī or ō sī with the subjunctive sometimes expresses a wish.

Sī nunc sē nōbīs ille aureus rāmus ostendat. (Aen. 6.187)
If now that golden branch would only show itself to us!

Note 2— The subjunctive of wish without a particle is seldom found in the Imperfect or Pluperfect except by sequence of tenses in indirect discourse (§ 585).

ac venerāta Cerēs, ita culmō surgeretaltō (Hor. S. 2.2.124)
and Ceres worshipped [with libations] that so she might rise with tall stalk
[In addressing the goddess directly the prayer would be: ita surgās]

b. Velim and vellem, and their compounds, with a subjunctive or infinitive, are often equivalent to an optative subjunctive.

Velim tibi persuādeās. (Fam. 9.13.2)
I should like to have you believe
(I should wish that you would persuade yourself).

Dē Menedēmō vellem vērum fuisset, dē rēgīnā velim vērum sit. (Att. 15.4.4)
About Menedemus I wish it had been true; about the queen I wish it may be.

Māllem Cerberum metuerēs. (Tusc. 1.12)
I had rather have had you afraid of Cerberus
(I should have preferred that you feared Cerberus).

Note— Velim etc., in this use, are either potential subjunctives, or apodoses with the protasis omitted (§ 447.1, Note). The thing wished may be regarded as a substantive clause used as object of the verb of wishing (§ 565, Note 1). 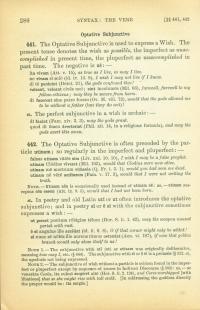 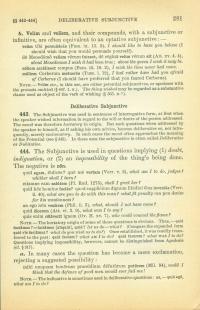