Note— When two persons of the same family are mentioned together, the cōgnōmen is usually put in the plural: Pūblius et Servius Sullae.

a. A fourth or fifth name was sometimes given as a mark of honor or distinction, or to show adoption from another gēns.

Note— The Romans of the classical period had no separate name for these additions, but later grammarians invented the word āgnōmen to express them.

b. Women had commonly in classical times no personal names, but were known only by the nōmen of their gēns.

Thus, the wife of Cicero was Terentia, and his daughter Tullia. A second daughter would have been called Tullia secunda or minor, a third daughter, Tullia tertia, and so on.

Note— In the abbreviations C. and Cn., the initial character has the value of G (§ 1.a).

1.In stating officially the full name of a Roman it was customary to include the praenōmina of the father, grandfather, and great-grandfather, together with the name of the tribe to which the individual belonged. Thus in an inscription we find M. TVLLIVS M. F. M. N. M. PR. COR. CICERO, i.e. Mārcus Tullius Mārcī fīlius Mārcī nepōs Mārcī pronepōs Cornēliā tribū Cicerō. The names of grandfather and great-grandfather as well as that of the tribe are usually omitted in literature. The name of a wife or daughter is usually accompanied by that of the husband or father in the Genitive: Postumia Servī Sulpiciī (Suet. Iul. 50)  Postumia, wife of Servius Sulpicius; Caecilia Metellī (Div. 1.104)  Caecilia, daughter of Metellus. 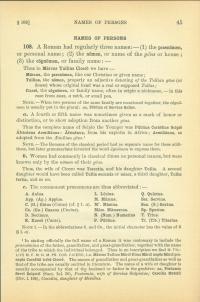