Irregularities and Special Uses of Adjectives

a. Several adjectives vary in declension.

b. A few adjectives are indeclinable.

Potis is often used as an indeclinable adjective, but sometimes has pote in the neuter.

d. Many adjectives, from their signification, can be used only in the masculine and feminine. These may be called adjectives of common gender. 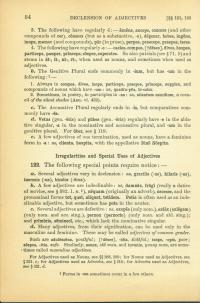