Irregular and Defective Comparison of Adjectives

129. Several adjectives have in their comparison irregular forms.

Note— These irregularities arise from the use of different stems (cf. § 127). Thus frūgālior and frūgālissimus are formed from the stem frūgāli-, but are used as the comparative and superlative of the indeclinable frūgī.

130. Some Comparatives and Superlatives appear without a Positive.

a. The following are formed from stems not used as adjectives. 2

b. Of the following the positive forms are rare, except when used as nouns (generally in the plural).

Note— The superlative postumus has the special sense of last-born, and was a well known surname.

131. Several adjectives lack the Comparative or the Superlative.

a. The Comparative is rare or wanting in the following.

b. Many adjectives in -ilis or -bilis lack the superlative—for example, agilis, probābilis, and the following.

c. From iuvenis (youth) and senex (old man) [cf. § 122.d], are formed the comparatives iūnior (younger) and senior (older). For these, however, minor nātū and mâior nātū are sometimes used (nātū being often omitted). The superlative is regularly expressed by minimus and maximus, with or without nātū.

Note— In these phrases nātū is an Ablative of Specification (see § 418).

d. Many adjectives (such as aureus golden) are incapable of comparison due to their meaning.

Note— But each language has its own usage in this respect. Thus, niger (glossy black) and candidus (shining white) are compared; but not āter or albus, meaning absolute dead black or white (except that Plautus once has ātrio).

1. The old positive potis occurs in the sense of able, possible. 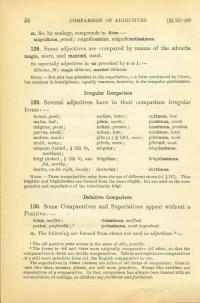 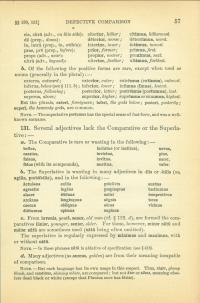