572. A peculiar form of substantive clause consists of quod (in the sense of that, the fact that) with the indicative. The clause in the indicative with quod is used when the statement is regarded as a fact.

alterum est vitium, quod quīdam nimis māgnum studium cōnferunt, etc. (Off. 1.19)
It is another fault that some bestow too much zeal, etc.

Here ut cōnferant could be used, meaning that some should bestow; or the accusative and infinitive, meaning to bestow (abstractly); quod makes it a fact that men do bestow, etc.

Inter inanimum et animal hōc maximē interest, quod animal agit aliquid. (Acad. 2.37)
This is the chief difference between an inanimate object and an animal, that an animal aims at something.

Praetereō quod eam sibi domum sēdemque dēlēgit. (Clu. 188)
I pass over the fact that she chose that house and home for herself.

Mittō quod possessa per vim. (Flacc. 79)
I disregard the fact that they were seized by violence.

Note— Like other substantive clauses, the clause with quod may be used as subject, as object, as appositive, etc., but it is commonly either the subject or in apposition with the subject.

a. A substantive clause with quod sometimes appears as an Accusative of Specification, corresponding to the English whereas or as to the fact that.

b. Verbs of feeling and the expression of feeling take either quod (quia) or the accusative and infinitive (indirect discourse).

Faciō libenter quod eam nōn possum praeterīre. (Legg. 1.63)
I am glad that I cannot pass it by.

Quae perfecta esse vehementer laetor. (Rosc. Am. 136)
I greatly rejoice that this is finished.

quī quia nōn habuit ā mē turmās equitum fortasse suscēnset (Att. 6.3.5)
who perhaps feels angry that he did not receive squadrons of cavalry from me.

Note— īror and similar expressions are sometimes followed by a clause with sī.1 This is apparently substantive, but really protasis (cf. § 563.e, Note 1).

Mīror sī quemquam amīcum habēre potuit. (Lael. 54)
I wonder if he could ever have a friend.
[Originally, If this is so, I wonder at it.] 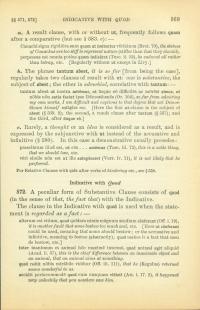 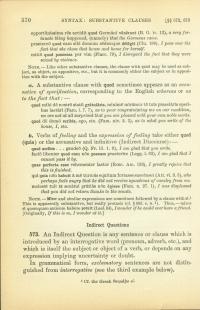