397. The accusative has the following special uses.

a. The accusative is found in a few adverbial phrases (Adverbial Accusative).

id temporis
at that time

id (quod) genus
of that (what) sort
(perhaps originally nom.)

meam vicem
on my part

bonam partem
in a great measure

maximam partem
for the most part

quod nisi
if not

b. The so-called synecdochical or Greek Accusative, found in poetry and later Latin, is used to denote the part affected.

ārdentīs oculōs suffectī sanguine et īgnī (id. 2.210)
their glaring eyes bloodshot and blazing with fire
(suffused as to their eyes with blood and fire)

Note— This construction is also called the Accusative of Specification.

c. In many apparently similar expressions the accusative may be regarded as the direct object of a verb in the middle voice (§ 156.a).

Inūtile ferrum cingitur. (Aen. 2.510)
He girds on the useless steel.

d. The accusative is used in exclamations.

Note 1— Such expressions usually depend upon some long-forgotten verb. The substantive is commonly accompanied by an adjective. The use of -ne in some cases suggests an original question, as in quid? (What? Why? Tell me.)

Note 2— The omission of the verb has given rise to some other idiomatic Accusatives.

e. The subject of an infinitive is in the Accusative.

Eās rēs iactārī nōlēbat. (B. G. 1.18)
He was unwilling that these matters should be discussed.

Note— This construction is especially common with verbs of knowing, thinking, telling, and perceiving (§ 580).

f. The Accusative in later writers is sometimes used in apposition with a clause.

Note— This construction is an extension (under Greek influence) of a usage more nearly within the ordinary rules, such as:

[Here Eumenes may be regarded as the price, although the real price is the betrayal.] 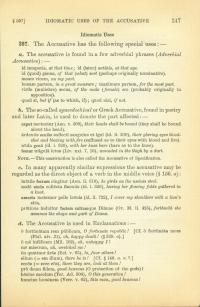 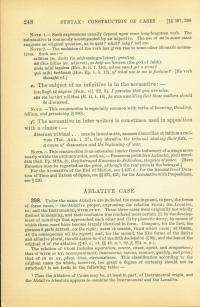