518. General Conditions (§ 513.2) have usually the same forms as Particular Conditions. But they are sometimes distinguished in the following cases.

a. The subjunctive is often used in the 2nd person singular, to denote the act of an indefinite subject (you = any one). Here the present indicative of a general truth may stand in the apodosis.

Sī prohibita impūne trānscenderis, neque metus ultrā neque pudor est. (Tac. Ann. 3.54)
If you once overstep the bounds with impunity, there is no fear or shame any more.

c. In later writers (rarely in Cicero and Cæsar), the imperfect and pluperfect subjunctive are used in protasis, with the imperfect indicative in apodosis, to state a repeated or customary action in past time (Iterative Subjunctive).

Sī quis ā dominō prehenderētur, concursū mīlitum ēripiēbātur. (B. C. 3.110)
If any (runaway) was arrested by his master, he was (always) rescued by a mob of soldiers.

cf. Sōcratēs, quam sē cumque in partem dedisset omnium fuit facile prīnceps (De Or. 3.60)
In whatever direction Socrates turned himself, he was (always) easily the foremost (if in any. etc.). 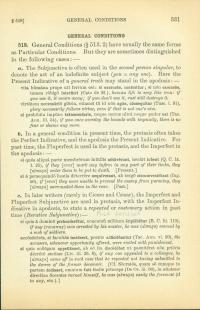