179. The forms of the several conjugations, including all the moods and tenses, can be made in the following manner by adding the verb-endings in § 166.

a. The 1st Conjugation includes all verbs which add ā- to the root to form the Present stem1 (amā-re) with a few whose root ends in -a-.

In the Present Subjunctive it is changed to ē.

b. The 2nd Conjugation includes all verbs which add ē- to the root to form the Present stem

But most form the Perfect stem by adding v (u) to the root, and the Supine stem by adding t to a weaker form of the Present stem, ending in ĭ. For lists, see § 210.

c. The 3rd Conjugation includes all verbs (not irregular, see § 197) which add ĕ- to the root to form the Present stem.

It also includes a few whose root ends in e.

1. The stem vowel ĕ is regularly lost before -ō, and becomes u2 before -nt, and ĭ before the other endings of the Indicative and Imperative.

In the Imperfect Indicative it becomes ē.

In the Future, ē.

In the Present Subjunctive, ā.

Verbs in -iō lose the i before a consonant, and also before ĭ, ī, and ĕ (except in the Future, the Participle, the Gerund, and the
Gerundive).

2. All varieties of Perfect and Supine stems are found in this conjugation. See lists, § 211. The Perfect is not formed from the Present stem, but from the root.

d. The 4th Conjugation includes all verbs which add ī- to the root to form the Present stem (audī-re).3 In these the Perfect and Supine stems regularly add v or t to the verb stem.4

Endings like those of the 3rd conjugation are added in the 3rd person plural of the Present (Indicative and Imperative), in the Imperfect and Future Indicative, and in the Present Subjunctive, the i being regularly short before a vowel.

e. The Present Imperative Active, 2nd person singular, is the same as the Present stem.

But verbs in -iō of the 3rd conjugation omit i.

f. The tenses of completed action in the Active voice are all regularly formed by adding the tense-endings (given in § 166) to the Perfect stem.

g. The tenses of completed action in the Passive voice are formed by adding to the Perfect Participle the corresponding tenses of continued action of the verb esse. 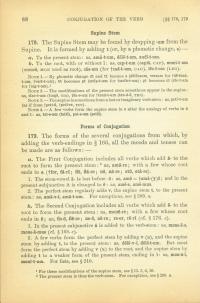 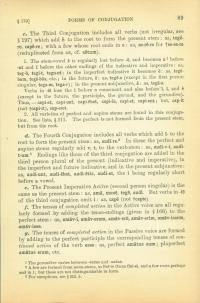