227. All formation of words is originally a process of composition. An element significant in itself is added to another significant element, and thus the meaning of the two is combined. No other combination is possible for the formation either of inflections or of stems. Thus, in fact, words (since roots and stems are significant elements, and so words) are first placed side by side, then brought under one accent, and finally felt as one word. The gradual process is seen in sea voyage, sea nymph, seaside. But as all derivation, properly so called, appears as a combination of uninflected stems, every type of formation in use must antedate inflection. Hence words were not in strictness derived either from nouns or from verbs, but from stems which were neither, because they were in fact both; for the distinction between noun stems and verb stems had not yet been made.

After the development of Inflection, however, that one of several kindred words which seemed the simplest was regarded as the primitive form, and from this the other words of the group were thought to be derived. Such supposed processes of formation were then imitated, often erroneously, and in this way new modes of derivation arose. Thus new adjectives were formed from nouns, new nouns from adjectives, new adjectives from verbs, and new verbs from adjectives and nouns.

Further, since the language was constantly changing, many words went out of use, and do not occur in the literature as we have it. Thus many Derivatives survive of which the Primitive is lost.

Finally, since all conscious word formation is imitative, intermediate steps in derivation were sometimes omitted, and occasionally apparent Derivatives occur for which no proper Primitive ever existed. 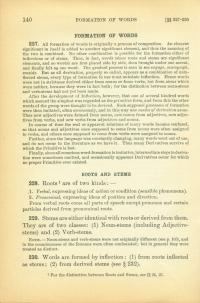