136. Distributive Numerals are declined like the plural of bonus.

Note— These answer the interrogative quotēnī (how many of each? or how many at a time?).

137. Distributives are used as follows:

a. In the sense of so many apiece or on each side.

b. Instead of cardinals, to express simple number, when a noun plural in form but usually singular in meaning is used in a plural sense.

With such nouns trīnī, not ternī, is used for three.

d. By the poets instead of cardinal numbers, particularly where pairs or sets are spoken of. 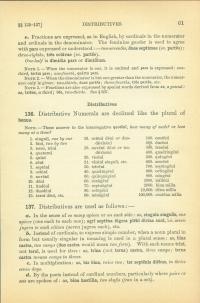