232. Derived Stems are formed from roots or from other stems by means of suffixes. There are two kinds of suffixes:

233. The words in Latin formed immediately from the root by means of primary suffixes are few, because:

A word like mēns, mentis, by the suffix ōn- (nom. -ō), gave mentiō, and this, being divided into men + tiō, gave rise to a new type of abstract nouns in -tiō (as, lēgā-tiō embassy).

A word like audītor, by the suffix io- (nom. -ius), gave rise to adjectives like audītōr-ius, of which the neuter (audītōrium) is used to denote the place where the action of the verb is performed. Hence tōrio- (nom. -tōrium), neuter, becomes a regular noun suffix (§ 250.a).

So in English such a word as suffocation gives a suffix -ation, and with this is made starvation, though there is no such word as starvate.

234. The following are examples of primary stem suffixes.

II. Suffixes with a consonant.

The above, with some suffixes given below, belong to the Indo-European parent speech, and most of them were not felt as living formations in the Latin.

235. Both primary and secondary suffixes, especially in the form of compound suffixes, were used in Latin with more or less consciousness of their meaning. They may therefore be called Significant Endings.

They form (1) Nouns of Agency; (2) Abstract Nouns (including names of actions) and (3) Adjectives (active or passive).

Note— There is really no difference in etymology between an adjective and a noun, except that some formations are habitually used as adjectives and others as nouns (§ 20.b, Note 2). 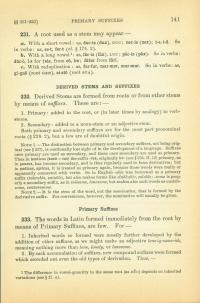 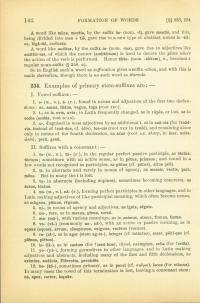 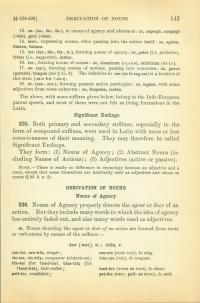