219. Prepositions were not originally distinguished from adverbs in form or meaning, but have become specialized in use. They developed comparatively late in the history of language. In the early stages of language development the cases alone were sufficient to indicate the sense, but, as the force of the case endings weakened, adverbs were used for greater precision (cf. § 338). These adverbs, from their habitual association with particular cases, became prepositions; but, many also retained their independent function as adverbs.

1. The case form of these prepositions in -ter is doubtful. 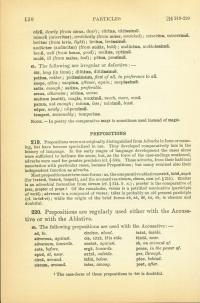