214. Adverbs are regularly formed from adjectives as follows.

a. From adjectives of the 1st and 2nd declensions by changing the characteristic vowel of the stem to -ē.

b. From adjectives of the 3rd declension by adding -ter to the stem. Stems in nt- (nom. -nst-). All others are treated as i-stems.

Note— This suffix is perhaps the same as -ter in the Greek -τερος and in uter, alter. If so, these adverbs are in origin either neuter accusatives (cf. d.) or masculine nominatives.

c. Some adjectives of the 1st and 2nd declensions have adverbs of both forms (-ē and -ter). Thus dūrus (hard) has both dūrē and dūriter; miser (wretched) has both miserē and miseriter.

d. The neuter accusative of adjectives and pronouns is often used as an adverb.

multum  much
facilĕ  easily
quid  why

This is the origin of the ending -ius in the comparative degree of adverbs (§ 218).

e. The neuter ablative singular or (less commonly) feminine of adjectives, pronouns, and nouns may be used adverbially

Note— Some adverbs are derived from adjectives not in use.

215. Further examples of adverbs and other particles which are in origin case forms of nouns or pronouns are given below. In some the case is not obvious, and in some it is doubtful.

nōn (for nē-oinom, later ūnum)  not
iterum (comparative of i- stem of is)  a second time
dēmum (superlative of dē down)  at last

Thus -tim became a regular adverbial termination; and by this means adverbs were made from many noun and verb stems immediately, without the intervention of any form which could have an accusative in -tim.

Some adverbs that appear to be Feminine Accusative are possibly instrumental.

aliās  elsewhere
forās  out of doors (as end of motion)

So perhaps quia because

Those in -trō are from comparative stems (cf. ūls, cis, re-).

a. Those in -tus (usually preceded by i), with an ablative meaning.

c. Those in dum (probably accusative of time) while; iam now

216. A phrase or short sentence has sometimes grown together into an adverb (cf. notwithstanding, nevertheless, besides).

Note— Other examples are: 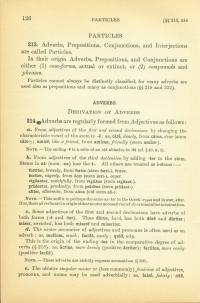 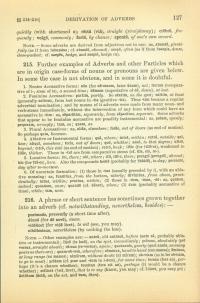