376. The dative often depends, not on any particular word, but on the general meaning of the sentence (Dative of Reference). The dative in this construction is often called the Dative of Advantage or Disadvantage,1 as denoting the person or thing for whose benefit or to whose prejudice the action is performed.

Laudāvit mihi frātrem.
He praised my brother (out of regard for me).
[laudāvit frātrem meum would imply no such motive].

Note— In this construction the meaning of the sentence is complete without the dative, which is not, as in the preceding constructions, closely connected with any single word. Thus the Dative of Reference is easily distinguishable in most instances even when the sentence consists of only two words, as in the first example.

377. The Dative of Reference is often used to qualify a whole idea, instead of the possessive genitive modifying a single word.

iter Poenīs vel corporibus suīs obstruere (Cat. M. 75)
to block the march of the Carthaginians even with their own bodies
(to block, etc., for the disadvantage of, etc.)

378. The dative is used of the person from whose point of view an opinion is stated or a situation or a direction is defined. This is often called the Dative of the Person Judging,2 but is merely a weakened variety of the Dative of Reference. It is used:

379. The Dative of Reference is used idiomatically without any verb in colloquial questions and exclamations.

a. The Dative of Reference is sometimes used after interjections.

Note— To express FOR—meaning instead of, in defense of, in behalf of—the ablative with prō is used. 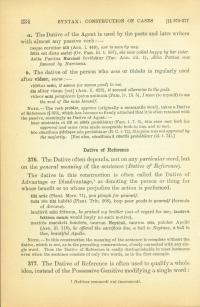 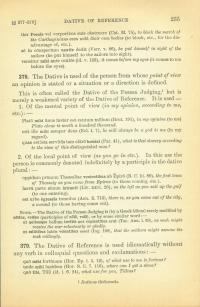 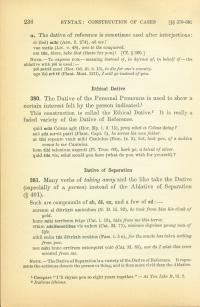