361. The dative is used to denote the object indirectly affected by an action. This is called the indirect object (§ 274). It is usually denoted in English by the objective with to.

362. The Dative of the Indirect object with the accusative of the direct may be used with any transitive verb whose meaning allows (see § 274).

Dō tibi librum.
I give you a book.

Commendō tibi êius omnia negōtia. (id. 1.3)
I put all his affairs in your hands. (commit them to you)

Litterās ā tē mihi stator tuus reddidit (Fam. 2.17)
Your messenger delivered to me a letter from you.

a. Many verbs have both a transitive and an intransitive use, and take either the accusative with the dative, or the dative alone.

363. Certain verbs implying motion vary in their construction between the Dative of the Indirect Object and the Accusative of the End of Motion (§§  426 - 427).

Interdīxit histriōnibus scaenam. (Suet. Dom. 7)
He forbade the actors [to appear on] the stage.
(He prohibited the stage to the actors).

365. Verbs which in the active voice take the accusative and dative retain the dative when used in the passive. 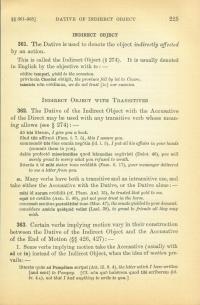 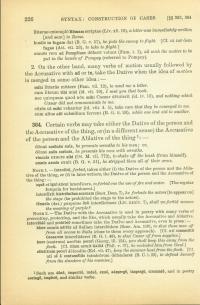 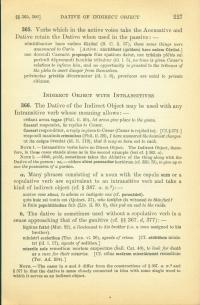