370. Many verbs compounded with ad, ante, con, in, inter, ob, post, prae, prō, sub, super, and some with circum, use the Dative of the Indirect Object.

Neque enim adsentior eīs. (Lael. 13)
For I do not agree with them.

quantum nātūra hominis pecudibus antecēdit (Off. 1.105)
so far as man's nature is superior to brutes

sī sibi ipse cōnsentit (id. 1.5)
if he is in accord with himself

Tempestātī obsequī artis est. (Fam. 1.9.21)
It is a point of skill to yield to the weather.

a. In these cases the dative depends not on the preposition, but on the compound verb in its acquired meaning. Hence, if the acquired meaning is not suited to an indirect object, the original construction of the simple verb remains.

Thus in convocat suōs (he calls his men together) the idea of calling is not so modified as to make an indirect object appropriate. So hominem interficere (to make way with a man, i.e. kill him). But in praeficere imperātōrem bellō (to put a man as commander-in-chief in charge of a war) the idea resulting from the composition is suited to an indirect object (see also b. and § 371, below; also § 388.b).

Note 1— Some of these verbs, being originally transitive, take also a direct object

b. Some compounds of ad, ante, ob, with a few others, have acquired a transitive meaning, and take the accusative (cf. § 388.b).1

c. The adjective obvius and the adverb obviam with a verb take the Dative.

sī ille obvius eī futūrus nōn erat (Mil. 47)
if he was not intending to get in his way

371. When place or motion is distinctly thought of, the verbs mentioned in § 370 (above) regularly take a noun with a preposition.

Inhaeret in visceribus. (Tusc. 4.24)
It remains fixed in the vitals.

Inserite oculōs in cūriam (Font. 43)
Fix your eyes on the senate house.

īgnis quī est ob ōs offūsus (Tim. 14)
the fire which is diffused before the sight

In segetem flamma incidit. (Aen. 2.304)
The fire falls upon the standing grain.

Temporī serviendum est (Fam. 9.7)
We must serve the exigency of the occasion.

Note— In poetry the personal construction is sometimes found. 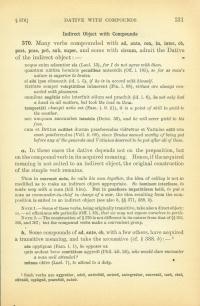 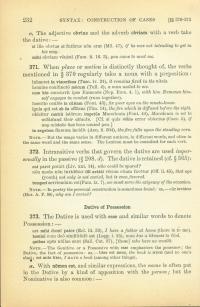