550. Antequam and priusquam (before) introduce clauses of time which resemble those with cum temporal in their constructions. Priusquam consists of two parts (often written separately and sometimes separated by other words), the comparative adverb prius (sooner; before), which really modifies the main verb, and the relative particle quam (than), which introduces the subordinate clause. The latter is therefore a relative clause, and takes the indicative or the subjunctive (like other relative clauses) according to the sense intended. The subjunctive with priusquam is related to that of purpose (§ 529) and is sometimes called the Anticipatory or Prospective Subjunctive. Antequam, like priusquam, consists of two words, the first of which is the adverb ante (before) modifying the main verb. Its constructions are the same as those of priusquam, but the latter is commoner in classic prose.

a. With antequam or priusquam the perfect indicative states a fact in past time.

Neque ante dīmīsit eum quam fidem deditadulēscēns. (Liv. 39.10)
And she did not let the young man go till he pledged his faith.

Neque prius fugere dēstitērunt quam ad flūmen pervēnērunt. (B. G. 1.53)
Nor did they stop running until they reached the river.

b. With antequam or priusquam the imperfect subjunctive is common when the subordinate verb implies purpose or expectancy in past time, or when the action that it denotes did not take place.

Ante pūgnārī coeptum est quam satis īnstruerēturaciēs. (Liv. 22.4.7)
The fight was begun before the line could be properly formed.

Priusquam tū suum sibi vēnderēs, ipse possēdit. (Phil. 2.96)
Before you could sell him his own property, he took possession of it himself.

Note 1— The pluperfect subjunctive is rare, except in indirect discourse by sequence of tenses for the future perfect indicative (§ 484.c).

Note 2— After an historical present the present subjunctive is used instead of the imperfect.

c. Antequam and priusquam, when referring to future time, take the present or future perfect indicative; rarely the present subjunctive.

Antequam veniatlitterās mittet. (Leg. Agr. 2.53)
before he comes, he will send a letter.

Note 2— In a few cases the subjunctive of present general condition is found with antequam and priusquam (cf. § 518.a). 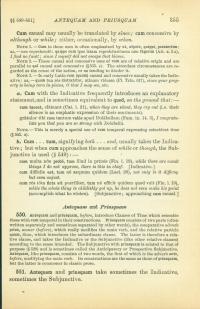 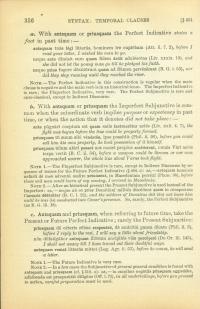