285. Adjectives are either attributive or predicate.

286. Adjectives, Adjective Pronouns, and Participles agree with their nouns in Gender, Number, and Case.

Note— All rules for the agreement of adjectives apply also to adjective pronouns and to participles.

a. With two or more nouns the adjective is regularly plural, but often agrees with the nearest (especially when attributive).

māgna pars raptae (id.1.9)
a large part [of the women] were seized.

Note— A superlative in the predicate rarely takes the gender of a partitive genitive by which it is limited.

287. One adjective may belong in sense to two or more nouns of different genders. In such cases:

a. Two or more abstract nouns of the same gender may have a predicate adjective in the neuter plural (cf. § 289.c, below).

288. Adjectives are often used as nouns (substantively), the masculine usually to denote men or people in general of that kind, the feminine women, and the neuter things.

Note— The plural of adjectives, pronouns, and participles is very common in this use. The singular is comparatively rare except in the neuter (§ 289.a and c, below) and in words that have become practically nouns.

a. Certain adjectives have become practically nouns, and are often modified by other adjectives or by the possessive genitive.

meus aequālis
a man of my own age

b. When ambiguity would arise from the substantive use of an adjective, a noun must be added.

bonī the good
omnia everything (all things)

BUT
potentia omnium rērum power over everything

c. Many adjectives are used substantively either in the singular or the plural, with the added meaning of some noun which is understood from constant association.

Note— These adjectives are specific in meaning, not generic like those in § 288.  They include the names of winds and months (§ 31).

289. Neuter adjectives are used substantively in the following special senses.

a. The neuter singular may denote either a single object or an abstract quality.

in āridō
on dry ground

honestum
an honorable act or virtue (as a quality)

b. The neuter plural is used to signify objects in general having the quality denoted, and hence may stand for the abstract idea.

praeterita
the past (lit., bygones)

c. A neuter adjective may be used as an appositive or predicate noun with a noun of different gender (cf. § 287. a, above).

Malum mihi vidētur esse mors. (Tusc. 1.9)
Death seems to me to be an evil.

d. A neuter adjective may be used as an attributive or a predicate adjective with an infinitive or a substantive clause.

290. An adjective, agreeing with the subject or object, is often used to qualify the action of the verb, and so has the force of an adverb.

Prīmus vēnit.
He was the first to come (came first). 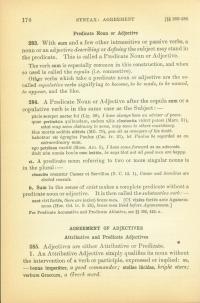 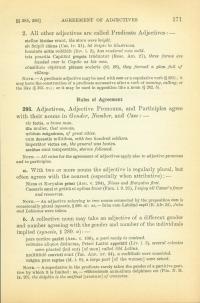 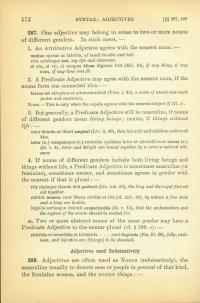 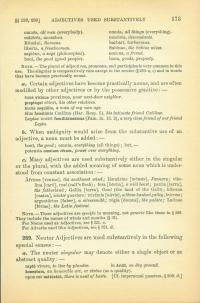 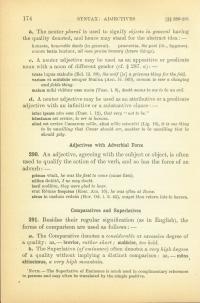