280. A word is said to agree with another when it is required by usage to be in the same gender, number, case, or person. The following are the general forms of agreement, sometimes called the Four Concords.

a. A word sometimes takes the gender or number, not of the word with which it should regularly agree, but of some other word implied in that word. This use is called Synesis, or cōnstrūctiō ad sēnsum (construction according to sense). 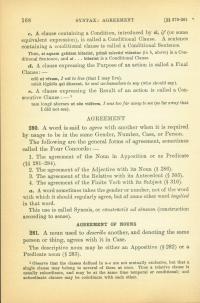