418. The Ablative of Specification denotes that in respect to which anything is or is done.

Corpore senex esse poterit, animō numquam erit. (id. 38)
He may be an old man in body, he never will be [old] at heart.

a. To this head are to be referred many expressions where the ablative expresses that in accordance with which anything is or is done.

[Here the sense is the same, but the first ablative is specification, the second source.]

[Here the ablative is not different in sense from those above, but no doubt is a development of means.]

[Here it is impossible to tell whether vīribus is the means of the superiority or that in respect to which one is superior.]

Note 1— So the verb dīgnor in poetry and later prose

Haud equidem tālī mē dīgnor honōre. (Aen. 1.335)
I do not deem myself worthy of such an honor.

Note 2— Dīgnus and indīgnus sometimes take the Genitive in colloquial usage and in poetry. 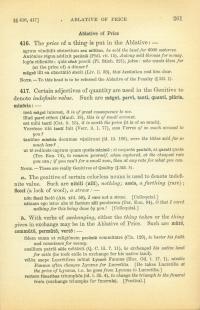 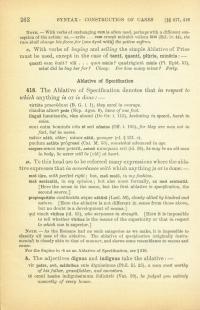