415. The quality of a thing is denoted by the ablative with an adjective or genitive modifier. This is called the Descriptive Ablative or Ablative of Quality.1

a. In expressions of quality the genitive or the ablative may often be used indifferently; but physical qualities are oftener denoted by the ablative (cf. § 345, Note).

ut capite opertō sit (Cat. M. 34)
to have his head covered
(to be with covered head)

1. It was originally instrumental and appears to have developed from accompaniment (§ 413) and manner (§ 412). 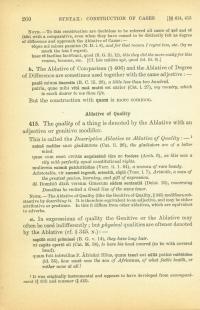