404. The ablative (with or without a preposition) is used to express cause.1

b. The motive which influences the mind of the person acting is expressed by the Ablative of Cause; the object exciting the emotion often by ob2 or propter with the Accusative.

Amīcitia ex sē et propter sē expetenda. (Fin. 2.83)
Friendship must be sought of and for itself.

Note— But these constructions are often confused.

Here metum is almost equivalent to “the terrors of the law,” and hence propter is used, though the ablative would be more natural.

c. The ablatives causā and grātiā (for the sake of) are used with a Genitive preceding, or with a pronoun in agreement.

Note— But grātiā with possessives in this use is rare.

1. The cause, in the ablative, is originally source, as is shown by the use of ab, dē, ex; but when the accusative with ad, ob, is used, the idea of cause arises from nearness. Occasionally it is difficult to distinguish between cause and means (which is the old instrumental case) or circumstance(which is either the locative or the Instrumental).

2. Originally a mercantile use: cf. ob decem minās for the price of ten minæ. 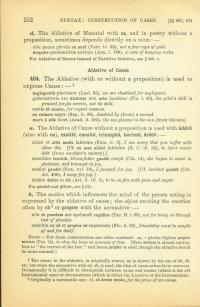 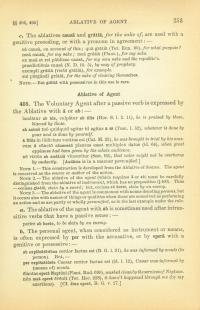