73. The i-declension was confused even to the Romans themselves, nor was it stable at all periods of the language, early Latin having i-forms which afterwards disappeared. There was a tendency in nouns to lose the i-forms, in adjectives to gain them. The nominative plural (-īs)1 was most thoroughly lost, next the accusative singular (-im), next the ablative (-ī); while the genitive and accusative plural (-ium, -īs) were retained in almost all.

74. I-stems show the i of the stem in the following forms:

a. They have the genitive plural in -ium (but some monosyllables lack it entirely). For a few exceptions, see § 78 below.

b. All neuters have the nominative and accusative plural in -ia.

e. The ablative singular of all neuters, and of many masculines and feminines, ends in -ī.

75. The regular case-ending of the accusative singular of i-stems (m. or f.) would be -im.

But, in most nouns this is changed to -em (following the consonant declension).

a. The accusative in -im is found exclusively—

1. In Greek nouns and in names of rivers.
2. In būris, cucumis, rāvis, sitis, tussis, vīs.
3. In adverbs in -tim (being accusative of nouns in -tis), as, partim; and in amussim.

b. The accusative in -im is found sometimes in febris, puppis, restis, turris, secūris, sēmentis, and rarely in many other words.

76. The regular form of the ablative singular of i-stems would be -ī.

But, in most nouns this is changed to -e.

a. The Ablative in -ī is found exclusively—

1. In nouns having the Accusative in -im (§ 75 above); also secūris.
2. In the following adjectives used as nouns.

b. The Ablative in -ī is found sometimes—

Note 2— Most names of towns in -e (as, Praeneste, Tergeste） and Sōracte, a mountain, have the ablative in -e. Caere has Caerēte.

77. The regular nominative plural of i-stems is -ēs,1 but -īs is occasionally found. The regular accusative plural -īs is common, but not exclusively used in any word. An old form for both cases is -eis (diphthong).

78. The following have -um (not -ium) in the genitive plural.

1. The Indo-European ending of the Nominative plural, -ĕs (preserved in Greek in consonant stems, as ὄρτυξ, ὄρτυγ-ες), contracts with a stem-vowel and gives -ēs in the Latin i-declension (cf, the Greek plural ὄεις ). This -ēs was extended to consonant stems in Latin.

2.Canis and iuvenis are really n-stems 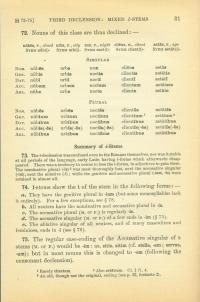 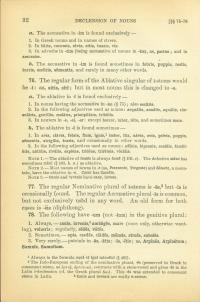