40. The Stem of nouns of the 1st declension ends in ā-. The nominative ending is -a (the stem-vowel shortened), except in Greek nouns.

41. Latin nouns of the 1st declension are thus declined:

a. The Latin has no article; hence stella may mean a star, the star, or simply star.

42. Nouns of the 1st declension are feminine, with the exception of nouns which are masculine from their signification (nauta, sailor). Similarly, a few family or personal names (Mūrēna, Dolābella, Scaevola;1 also, Hadria, the Adriatic).

1. Scaevola is really a feminine adjective, used as a noun, meaning little left hand; but, being used as the name of a man (originally a nickname), it became masculine. Original genders are often thus changed by a change in the sense of a noun. 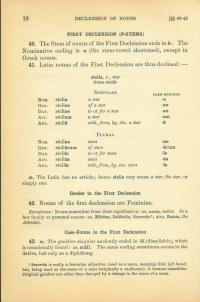