The Romans too deemed Nepos suitable for novices, even if Nepos himself did not set out to create a schoolbook. For modern readers, his simple, regular style provides a useful counterpoint to the more artful and varied grammar, vocabulary, and techniques found in more illustrious authors. Like many other Roman academics, encyclopedists, and chroniclers—e.g. Velleius Paterculus, Valerius Maximus, and Suetonius—Nepos wrote in what has been called a "middle style," a blend of simple and ornate sentences that mixes colloquialisms and archaisms. Having read Nepos, what makes Cicero Ciceronian, Caesar Caesarian, or Tacitus Tacitean will be all the more recognizable. Nepos may suffer in comparison to these masters of Latin prose style, who deploy with more elegance and creativity the linguistic and stylistic capacities that make Latin such a subtle and powerful medium for communication. But then, there are precious few writers of any era or in any language that could withstand such comparison. As we shall see, the motivation for his simple style and the decisions he made about what to include in his Lives can be explained by two additional factors: the aims and process of biographical writing in antiquity and the audience for whom Nepos wrote.

2. Ablative Absolutes: The ablative absolute is a construction favored by most Roman authors, especially those who are recounting events. Nepos is no exception, and ablative absolutes are common in the condensed narrative that dominates the second half of the Life. Nepos will even include two ablative absolutes in a single sentence (e.g. 5.1, 9.3, 10.1). Because of Nepos' preference for clear connections between sentences, ablative absolutes will often follow a connective: Illī, dēspērātīs rēbus...(8.2); Hās, praesentibus prīncipibus...(9.3); ille, īnscientibus iīs...(9.4); or a noun indicating a change in subject: Poenus, illūsīs Crētēnsibus omnibus...(10.1); Tabellārius, ducis nāve dēclārātā suīs...(11.2); Eumenēs, solūtā epistulā...(11.3).

3. Featured Prepositions and Conjunctions: Nepos' condensed style features an abundance of prepositions. For example, the preposition in is the third most common word in the Life. Nepos shows an unusual affinity for apud (15 times) and adversus (6 times), prepositions used more sparingly by most authors. Conversely, Nepos avoids some common prepositions, such as inter and per, each of which appears only once in the Life. Throughout his works, Nepos displays an affinity for the conjunctions nam, which signals that a sentence will justify or explain the preceding statement (AG §324h), and enim, used to introduce an example that explains a generalization found in the previous sentence.

2. Callidus: "extreme cleverness," a term Nepos uses to characterize the audacious Hannibal (9.2) and the cautious Fabius Maximus (5.2), whose strategic foresight allowed the Romans to recover from the military catastrophes they suffered at Hannibal's hands.

3. Prūdentia: Hannibal's cardinal virtue, according to Nepos—the ability to perceive a situation in its entirety and act accordingly (1.1, 11.7; imprūdente: 2.6). 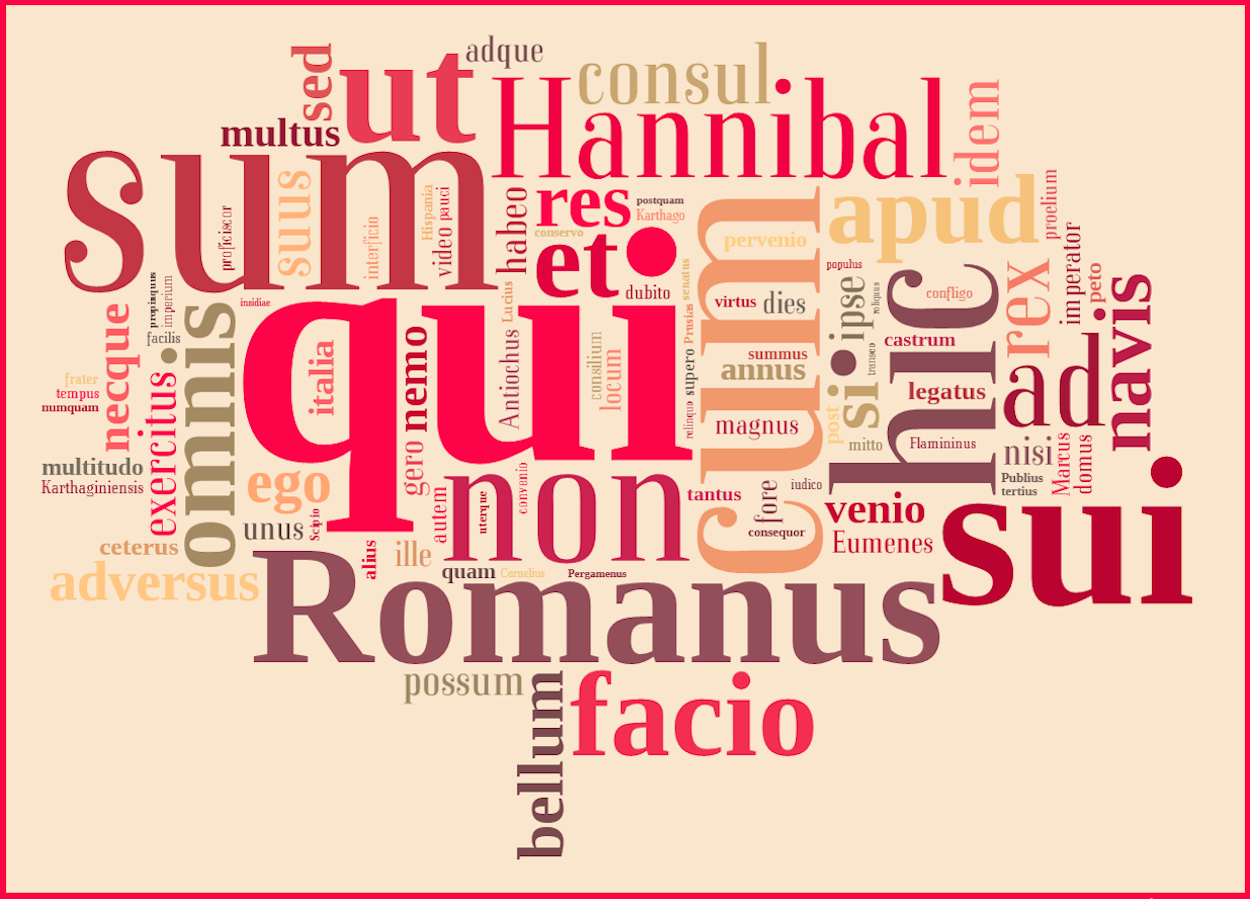