In Rome, Nepos devoted himself to his studies, avoiding the increasingly dangerous politics of the late republic. He forged durable friendships with several notable Romans: the politician Metellus Celer, the scholar Atticus, the statesman Cicero, and the poet Catullus. These relationships provide glimpses into Nepos' life, as well as valuable information about the intellectual context for his writings.

There is indirect evidence that Nepos enjoyed a close relationship with the Caecilii Metelli, one of the wealthiest and most influential families in Rome. Nepos' writings often display a special interest in commemorating the achievements of members of this family. And on several occasions Nepos maligned the decadent luxury of one of the family's notorious political rivals: Publius Cornelius Lentulus Spinther. From the historian Pomponius Mela we learn that Nepos was a personal acquaintance of Metellus Celer, brother to Metellus Nepos and husband of the notorious Clodia (the lover of Catullus). According to Mela, Metellus Celer once told Nepos about the fantastic sea voyage endured by a group of Indian merchants. Carried all the way to northern Europe by a terrible storm, the Indians were captured by a local German chieftain, who then presented them as a gift to Celer.1  Nepos may have been a client of this powerful family, or his intellectual pursuits may have led to a more equal friendship with Celer. Regardless of the exact nature of their relationship, his association with this powerful family demonstrates Nepos' access to the upper echelons of Roman society. 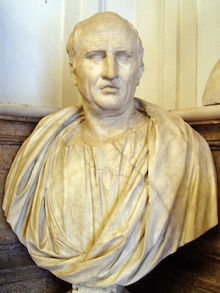 Soon after arriving in Rome, Nepos forged a lasting friendship with Titus Pomponius Atticus (ca. 109–ca. 32 BC), the adopted son of Quintus Caecilius Metellus. Atticus was a close friend of Cicero and a distinguished patron of the literary arts in Rome. Nepos would compose a laudatory biography of Atticus (the longest of his works to survive) and dedicate several works to his friend, including the book of biographies that contains the Life of Hannibal. Atticus, who often goaded Cicero to attempt writing in new literary genres, may likewise have encouraged Nepos to begin work on his innovative project of comparative biography.

It may have been through Atticus that Nepos met Cicero, Rome's greatest orator. Like Nepos, Cicero had immigrated to Rome from a small Italian town. But unlike Nepos, Cicero had devoted himself to politics, becoming one of the central figures in the contentious partisan drama of the late republic. Despite their different dispositions, Nepos became one of Cicero's more frequent correspondents—two books of letters from Cicero to Nepos were known in antiquity, although these are now lost.2  According to Aulus Gellius (ca. AD 125–180), Nepos was "one of Cicero's most intimate friends" (maxime amicus familiaris).3  Other evidence, however, points to a relationship that was more cordial than close.

Disagreement about the value of philosophy seems to have contributed to the tension between Cicero and Nepos. In 44 BC, when Atticus mentioned that Nepos was eager to read Cicero's latest philosophical work, Cicero expressed his doubts about Nepos' sincerity, since Nepos had previously disparaged Cicero's philosophical works as merely a venue in which he could "display his pride."4  While Cicero sought solace and wisdom from philosophy in the final years of his life, Nepos was skeptical that philosophy could be an "instructor of life" (magistram vitae).  Nepos observed that the same philosophers who taught "most cunningly in the school about modesty and continence" were often those who lived the most hedonistic lives of luxury.5 For Nepos, good character was cultivated by observing and emulating virtuous behavior, not by abstract philosophizing. Nepos' friendship with Cicero illustrates the difficulties we face in attempting to reconstruct the life of the biographer. Since Cicero's letters to Nepos have not survived, our best evidence about their relationship comes from passing comments that Cicero made to Atticus, who often acted as an intermediary between his two friends. For example, it was Atticus who informed Cicero that Nepos' young son had passed away in 44 BC. Cicero expresses his sadness at Nepos' loss, but also, in a somewhat obscure passage, claims that he was unaware of the child's existence.6  Was the child so young that Cicero had not yet heard of his birth? Was their relationship more intellectual—based on debating points of literature, history, and philosophy—than personal? Or were Cicero and Nepos rarely in touch by this late point in Cicero's life?

Other comments by Cicero are even more difficult to assess. Atticus once joked that he was inferior to Nepos just as Ajax was inferior to Achilles. Cicero corrected his friend, saying that Atticus was not second-best but, was, like Achilles, the best of all men, while Nepos should be considered an "immortal."7  Is Cicero suggesting that Nepos' talents truly place him in another class? Or is Cicero making a now obscure joke at Nepos' expense? Likewise, what could Cicero have meant in another letter when he chides Nepos, saying "to top it off you ambushed me with false gifts!" (hoc restituit a te fictis aggrederer donis!).8  Is Cicero's indignation sincere? The pretentious introduction, the derogatory fictis, the unusual imperfect passive of aggrederer, and the surprising conclusion—what are "false gifts"?—suggest a semi-serious or even jocular tone, as Cicero feigns annoyance with a close friend. But without context, we cannot be sure.

Despite the apparent coolness of their relationship, Nepos had enormous respect for Cicero's political talents. He composed a long biography of his friend. Reflecting on Cicero's letters, he effused that the statesman had "not only predicted the events that did take place during his life, but had even prophesized those events that are now coming to pass."9  Nepos also greatly esteemed Cicero's eloquence and praised his potential as a historian, going so far as to declare that Cicero's murder had not only deprived Rome of a great statesman, but denied to Latin historiography the same polish and elegance that Cicero's labors had furnished to oratory and philosophy. Cicero, in turn, respected Nepos' aesthetic judgment and his knowledge of oratory and historical writing. After Cicero was assassinated, Nepos helped Atticus publish the statesman's letters. Nepos would later say that these letters captured the truth of events better than any history.10

Nepos must have already earned a reputation as a learned historian by the 50s BC, when Catullus, the young poet and a fellow emigrant from northern Italy, dedicated a collection of his poems to the scholar (Catullus 1):

Reading the poem, we learn that Nepos valued Catullus' poetry in the past and that Catullus believes that Nepos will appreciate his latest effort. Catullus suggests that his poetry shares some affinities with Nepos' (lost) Chronica, a concise universal history. Several phrases in Catullus' dedicatory poem indicate that the poet was familiar with Nepos' writings. Nepos was fond of characterizing the excellence of his subjects by noting that they were the only man (unus) to have accomplished some notable achievement. He also twice describes the process of the writing of history by using the verb explicare. These favorite terms influenced Catullus' own praise of Nepos as the man who "alone of all Italians" (unus Italorum) had "dared to explain" Roman and Greek history (ausus es...explicare). The description of Nepos' work as "scholarly" (doctis) engages a key interpretive term for Catullus, indicating a laudable talent for composing and appreciating works that flaunt specialized (or even arcane) knowledge of history, language, and myth. Through these verbal echoes of Nepos' work—and since so many of Nepos' works are now lost, there may well be more that are now obscure to us—Catullus further associates his poetry with his friend's historical works.

Yet Catullus' praise of Nepos is not without ambiguity: is Nepos' history "full of effort" (laboriosis) because it is the laudable product of intense scholarship or because it is a chore to read—or perhaps both? For Catullus, labor need not suggest a lack of craftsmanship or pleasure. He describes his playful day spent composing poems with his friend Licinius as a labor.11  And he calls the Zmyrna—a dense, learned poem over which his friend Cinna labored for nine years—a "little monument" and a "personal favorite."12

Whatever teasing ambiguity may animate the poem, Catullus' decision to dedicate his collection to Nepos confirms the esteem that the poet had for the scholar. It also suggests that Nepos enjoyed a lofty reputation among Catullus' Roman audience, since we would expect Catullus to dedicate his collection to a figure who would bring credit to his poetry.  Their personal connection may have been strengthened by a mutual distaste for Mammura, Caesar's sybaritic associate, whom Catullus reviled in several poems. Nepos also criticized Mamurra, observing that he was the first Roman to cover his walls with marble, an innovation that, in Nepos' judgment, exhibited his "utter lack of class."13  Many years later, Nepos would return the compliment of Catullus' dedication by praising his deceased friend as one of the finest poets of his lifetime, ranking him as the equal of the magnificent didactic poet Lucretius.14