This site contains a Latin text, notes, vocabulary, and media for Cornelius Nepos' Life of Hannibal. It also includes the Prologus (preface) to Nepos' biographies of foreign commanders. Although the Prologus is not essential for understanding the Life of Hannibal, it does provide valuable insight into Nepos’ reasons for writing biography, his intended audience, and how Nepos understood the relationship between Roman and non-Roman values. 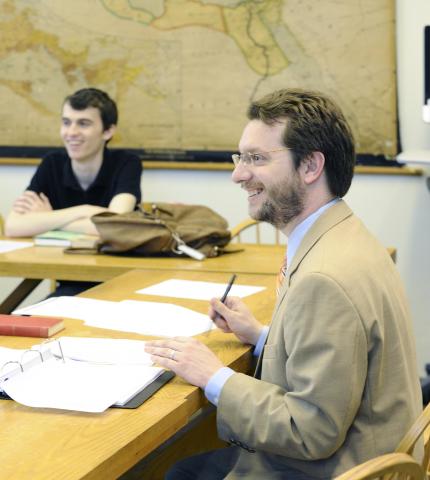 As Rome completed its bloody transition from dysfunctional republic to stable monarchy, Cornelius Nepos (ca. 100–27 BC) labored to complete an innovative and influential collection of concise biographies. Putting aside the detailed, chronological accounts of military campaigns and political machinations that characterized most writing about history, Nepos surveyed Roman and Greek history for distinguished men who excelled in a range of prestigious occupations. In the exploits and achievements of these illustrious men, Nepos hoped that his readers would find models for the honorable conduct of their own lives.

Although most of Nepos' works have been lost, we are fortunate to have his biography of the Carthaginian general Hannibal. One of history’s most celebrated military leaders, Hannibal waged a brilliant—if ultimately futile—campaign against Rome during the Second Punic War (218–202 BC). Nepos sketches Hannibal’s life from the time he began traveling with his father's army as a young boy, through his sixteen-year invasion of Italy and his tumultuous political career in Carthage, to his perilous exile and eventual suicide far from Carthage. Nepos’ biography offers a surprisingly balanced portrayal of a man that most Roman authors vilified as the most monstrous foe that Rome had ever faced.

Nepos' straightforward style and his preference for common vocabulary make this text accessible for those who are beginning to read continuous Latin prose, while the historical interest of the subject make it compelling for readers of every ability. Attention is paid throughout this commentary to how Nepos constructs his sentences and how he combines these sentences into a continuous narrative. Each chapter features a running list of the (relatively few) words that are not found in the DCC's Latin Core. Non-core vocabulary words that appear more than once in the Life are indicated by a reference mark (※). Common proper names are glossed in the chapter in which they first appear. To help readers acquaint themselves with the events of Hannibal's lifetime, historical notes and explanations of Roman and Carthaginian culture are frequent. Locations mentioned in the text, notes, or essays are linked to Pleiades whenever possible. Events and figures mentioned by Nepos are contextualized using translated passages from other ancient authors.

Notes, introductory matter, and essays are by Bret Mulligan, Associate Professor of Classics at Haverford College. For further information on other contributors and for details on the Latin text, please see the credits page.

Previous
Preface
Next
Life of Nepos