The seeds of the First Punic War had been sown in the 280s BC when a small band of unemployed Italian mercenaries, known as the Mamertines or the "Sons of Mars," occupied the strategic town of Messana in northeast Sicily. Situated on the narrow straight the separates Sicily from Italy, Messana controlled commerce and communications between Sicily and the mainland. When Hiero II of Syracuse attempted to dislodge the Mamertines in 265, they enlisted the aid of a nearby Carthaginian fleet, whose swift intervention forced Hiero to withdraw. The Mamertines soon regretted the Carthaginian occupation and appealed to Rome for protection, citing their status as Italians. Rome was hesitant to become entangled in a conflict outside of Italy or to come to the aid of the piratical Mamertines. Indeed, Rome had only a few years before executed a similar group who had occupied the Italian town of Rhegium. Yet Rome's fear of a Carthaginian stronghold so close to Italy—and greed for plunder in what they assumed would be a short war against Syracuse—outweighed their concerns. The Romans, under the command of the consul Appius Claudius Caudex, invaded Sicily and marched to the Mamertines' aid. 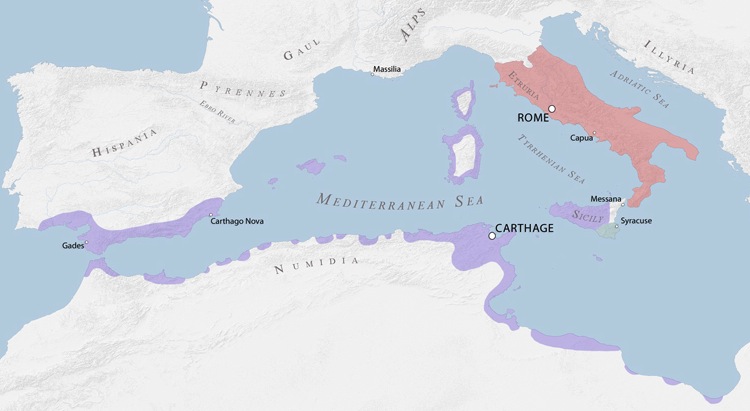 When the Mamertines learned that the Romans were approaching, they persuaded the Carthaginian general to withdraw his forces from the city. The general, regretting this decision to abandon the city, took the fateful steps of allying with Hiero. The combined Carthaginian and Syracusan forces then besieged Messana. After attempts to negotiate a truce failed, Carthage and Rome began hostilities. Both sides were confident of a quick and decisive victory. Neither side anticipated the horror that was to come: a ferocious, generation-long war, which would witness many large-scale disasters and innumerable small-scale atrocities. This war would transform the Roman and Carthaginian empires, upend the balance of power in the western Mediterranean, and set the stage for Hannibal's avenging assault on Italy.

It was in Sicily that the war began and in and around Sicily where most of the fighting took place. Roman forces swiftly crossed over into Sicily, captured Messana, and then forced Syracuse to capitulate. Carthage, after crucifying the tentative general who had lost the strategic initiative by permitting Rome's invasion, adopted the cautious strategy that they had honed in generations of intermittent fighting against the Sicilian Greeks. Their mercenary army, operating from fortified towns, would harass the allies of Rome and Syracuse, eventually sapping their will to continue the fight, while allowing Carthage to make opportunistic gains whenever an opportunity arose. It was a defensive strategy, designed to preserve a status quo that was quite satisfactory to the Carthaginians. But the Carthaginians would soon realize that the Romans were a decidedly more powerful and more lethal foe than the loose confederations of Greek city-states that they had previously fought.

In 262, the Romans moved against the fortified city of Agrigentum. After Roman forces defeated a Carthaginian army that had been sent to lift the siege, they brutally sacked the city. Rome was not interested in restoring the status quo; they sought to expel Carthage from Sicily. The sack of Agrigentum stiffened Carthaginian resolve. Attempts by Rome to follow up on their success by capturing other Carthaginian cities in Sicily proved costly and ineffective. A bloody strategic stalemate developed in which cities would be taken and switch sides only to be retaken or betrayed again. 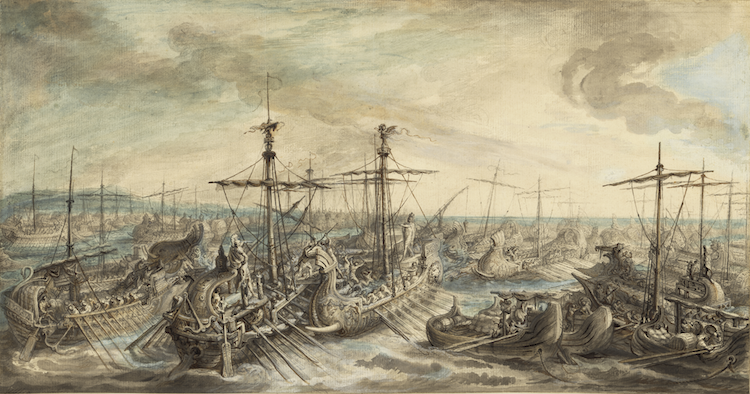 Rome realized that defeating Carthage would require a navy that could attack the Carthaginian homeland in Africa and thwart Carthage's ability to resupply its beleaguered coastal cities in Sicily. To counter Carthage's naval superiority, Rome undertook a rapid armament program, building and training a navy in a matter of months. After early losses at sea, Romans determined that they could exploit their own superiority in close-quarter fighting by equipping their ships with a hooked gangplank—the corvus or "crow"—that allowed Roman marines to grapple, board, and capture Carthaginian ships. Eventually, in 256 a Roman fleet of over 300 ships and 150,000 men defeated the Carthaginians off Cape Ecnomus. The path to Africa lay open.

The African campaign of 256-255 met with early success. Romans under the consul Atilius Regulus ravaged the African countryside and won a smashing victory that forced Carthage to sue for peace. But when Rome offered terms that were excessively punitive, Carthage hired the Spartan Xanthippus to reorganize its army and plan the defense of its territory. Xanthippus lured Regulus into a battle on open ground, where Carthage's war elephants and its advantage in cavalry overwhelmed the Romans. Only 2,000 Romans—from a force of over 15,000—survived to be evacuated by the Roman fleet. The consul Regulus was captured (he would later be tortured to death). Compounding the disaster, a storm wrecked nearly the entire evacuation fleet before it reached Italy. As many as 90,000 men drowned, taking with them Rome's hopes of invading Africa and forcing a quick end to the war. Attention turned again to Sicily and the brutal war of attrition.

While Rome regrouped and rebuilt its fleet, Carthage enjoyed a brief period of success in Sicily. Rome, however, soon regained the offensive, capturing numerous cities in rapid succession and securing all but the westernmost region of the island. Yet Rome failed to press its advantage. Since they sought the capitulation of Carthage, they sent their fleet in 253 to raid the Libyan coast, where it was lost in a storm—another 150 ships and over 60,000 men drowned. In the meantime, Carthage was able to transport 100 war elephants to Sicily, further deterring the Romans, who were mindful of the role the elephants played in the destruction of Regulus' army. Rome would require two years before it could resume serious offensive operations, when they besieged the stronghold of Lilybaeum, the lynchpin of Carthage's remaining defenses in Sicily.

Old patterns soon reasserted themselves. The Romans were unable to prevent the Carthaginians from resupplying the garrison by sea. Indeed, the daring Carthaginian admiral Ad Herbal often simply sailed his better-trained and nimbler ships past the Roman fleet in broad daylight. Provoked by this humiliating display of superior Carthaginian seamanship, the consul Publius Claudius Pulcher prepared a surprise assault against the Carthaginian fleet at Drepana. Appearing outside the harbor at dawn and with the element of surprise, Pulcher appeared to be on the brink of a decisive victory that might well have won Rome the war. Instead, the Roman assault was fatally delayed as they awaited a favorable omen, allowing Ad Herbal to clear the harbor [supplementary text: Publius Claudius Pulcher and the Sacred Chickens]. Pulcher's fleet, now hopelessly outmaneuvered and trapped against the Sicilian coast, lost ninety ships. Within days, a second Roman fleet of 120 ships and 800 transports was destroyed by a storm in eastern Sicily. The Romans would never take Lilybaeum by force; seven years would pass before the Romans had the courage and financial resources to build another fleet.

The war in Sicily was again at a stalemate. With the exhausted opponents no longer able to mount large scale operations, the war devolved into a series of small-scale ambushes and atrocities. Hamilcar Barca, Hannibal's father, began waging an audacious guerilla campaign against Roman forces and allies. Finally in 243 BC the Roman Senate resolved to resume large-scale offensive operations. A new fleet, financed by onerous loans, was constructed. After the destruction of one Carthaginian fleet by storm in 241 and another at the Battle of the Aegates Islands, a faction of wealthy landowners that favored peace came to power in Carthage. The long war drew to a close.

Rome had outlasted Carthage, which had never adapted to Rome's aggressive strategy. As Rome systematically worked to expand its territory in Sicily and pressure Carthage by invading and raiding Africa, Carthage passively reacted to Rome's moves, stubbornly fighting a defensive war that aimed only at not losing the conflict. Although individual Carthaginian generals displayed brilliance at sea and on land (none more so than Hamilcar), Carthage never devised a strategy to defeat the more populous Rome, which routinely absorbed horrific losses and staggering defeats only to regroup and resume the attack. Hamilcar would pass these hard-won lessons to Hannibal, who would devise a bold, aggressive strategy to defeat Rome.

As part of the terms of the peace, Carthage agreed to surrender Sicily and its naval bases on the surrounding islands to the Romans, avoid conflict with Syracuse and other Roman allies, release Roman prisoners without ransom, and pay an enormous indemnity of 3,200 talents or the equivalent of nearly 100 tons of silver. Rome, which before the war had never fought outside of Italy, now controlled a wealthy overseas territory—its first of many. Nevertheless, their victory must have been bittersweet. During the long 23 years of conflict, Rome lost over 600 ships, Carthage at least 500. As many as 50,000 Roman citizens and another 350,000 allies had been killed, most suffering horrific deaths at sea. The Carthaginians too suffered terribly in the war, a losing effort that left them economically bankrupt, deprived of their possessions in Sicily, and bereft of their signature navy. Before the war, Rome and Carthage were wary rivals with a long tradition of coexistence and even cooperation; afterwards, they were bitter enemies, each steeped in a generation of blood. For the Romans, their erstwhile allies were now seen as bloodthirsty and duplicitous. Indeed, the phrase Punica fides ("Carthaginian loyalty") became a byword for the most vicious kind of treachery. Romans simultaneously reviled Carthaginians as cruel and cowardly: they were said to sacrifice children and eat dogs, while being in the emasculating grip of eastern-style luxury and enervated by Africa's climate. We can assume that the same animus roiled the Carthaginians against the Romans. The peace, like the war, would last for 23 years. But the stage had been set for an even greater conflict, one that would push first Rome and then Carthage to the brink of destruction. 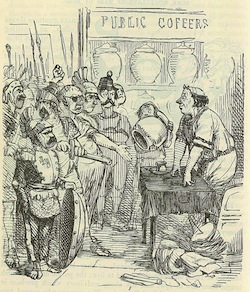 Carthage's humiliating defeat and the economic depression that followed precipitated a vicious rebellion by Carthage's mercenary soldiers and African allies known as the "Truceless" or "Mercenary" War (241–237 BC). Rome, which officially supported Carthage in the conflict, nevertheless took advantage of Carthage's weakness to seize Sardinia and Corsica and to extort additional reparations. Eventually, under the leadership of Hamilcar and Hannibal's brother-in-law, Hasdrubal the Fair, Carthage was able to suppress the rebellion. Because of Hamilcar's role in rescuing Carthage from this crisis, he and his family gained considerable influence among the Carthaginian people, as well as widespread support throughout the Carthaginian government.

With its territories in Sicily, Sardinia, and Corsica lost to Rome, Hamilcar sought new conquests in Hispania, a wealthy region that included the richest silver mines in the Mediterranean. By the 220s Carthage had recovered from its defeat in the First Punic War. Meanwhile Rome, content with the status quo, recognized Carthage's gains in Hispania and turned its attention to governing its new territories and completing the conquest of northern Italy. The Romans organized Sicily and then Sardinia and Corsica as their first overseas provinces. From 225 to 222 BC, Rome pacified the Gauls in northern Italy and then began campaigning in Illyria across the Adriatic Sea. Rome's eastward expansion into Illyria, however, was cut short by unforeseen events in Hispania, events that would soon involve Rome in a fight for its very survival.