This site contains a Latin text, notes, vocabulary, and media for Book I of Ovid's Amores, intended for reading. Notes, introductory matter, and essays on each poem are by William Turpin, Professor of Classics at Swarthmore College. Images illustrative of the Latin were chosen and annotated by Christopher Francese, Professor of Classical Studies at Dickinson College, with help from Daniel Plekhov (Dickinson '14) and Bart Hulesenbeck, Postdoctoral Fellow in Digital Classics at Dickinson. Audio recordings of the Latin are by Meghan Reedy and Letizia Palladini. The vocabulary lists for each poem were created by Alice Ettling ('12) and James Martin ('13). Only words not in the DCC Core Latin Vocabulary are glossed. The Google Earth map of all places mentioned in Amores 1 was created by Meredith Wilson ('13). The site was designed by Chris Stamas, and created in Drupal by Ryan Burke with help from Lara Frymark ('12) and Travis Ramsey ('13). The content was edited by Christopher Francese, Bart Huelsenbeck, and JoAnne Miller. The creation of this site was made possible by the Roberts Fund for Classical Studies at Dickinson College, at Dickinson's Department of Classical Studies. 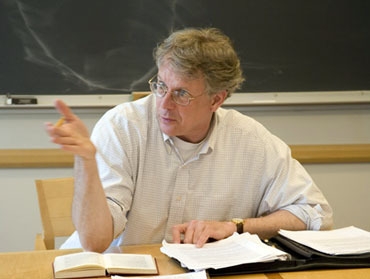 Prof. Turpin would like to acknowledge that the notes owe a great deal to the introductory edition of John Barsby and to the learned commentary of J. C. McKeown, which should be the first resources for details or clarification of difficult points; and that the notes have been improved by the comments of his colleagues Robert Sklenar and Christopher Francese, who used earlier drafts in their classes. Prof. Turpin is especially grateful to an able Swarthmore student, Nandini Pandey, who read the whole manuscript with a sharp eye both for errors and for possible improvements.

The Latin text is close to that of E. J. Kenney's Oxford Classical Text (revised edition, 1994).

Notice an error or want to make a comment or suggestion? Please contact Prof. Francese at francese@dickinson.edu.