The Manuscript Tradition of Ovid's Amores

by Bart Huelsenbeck, with the assistance of Dan Plekhov

The manuscript witnesses to the Amores fall into two groups: the four earlier manuscripts (vetustiores) listed above, and an abundance of later manuscripts, referred to collectively as recentiores and dating to the 12th century and after. Franco Munari (1951) and E. J. Kenney (1961), who produced the first modern critical editions of the Amores, regarded these two groups of manuscripts (older and more recent) as representative of two independent lines of transmission. The dates of the manuscripts seemed to correspond closely with two separate pedigrees: the vetustiores were traced back to a now lost hyparchetype, called α, and the recentiores to a second lost hyparchetype, called β. (The independence of the β manuscripts is guaranteed by the presence of verses [1.13.11–14; 2.2.18–22, 25–27] that are absent from α manuscripts.)

This view of the data, current at the time of the first edition of Kenney’s Oxford Classical Text (1961), kept the textual transmission of the Amores relatively simple. The α branch was particularly straightforward since it consisted of only a few extant manuscripts. Making matters simpler still, within the α branch P was thought to be a copy of R. The perception that P descended directly from R could have eliminated its relevance in the eyes of textual critics, except for the fact that the portion of R (designated (R´)) containing the Amores is almost entirely lost. Consequently, P, which was believed to reflect α through the intermediary of R, needed to be used. S was, and still is, considered an inferior manuscript. It contains readings thought to be imported from the β branch, and, except for one passage (Am. 2.8.7), it does not offer good readings that cannot be found elsewhere. S, in the words of Kenney (1962:8), is “in an intermediate state of depravation”—textual critics frequently impute moral characteristics to manuscripts: the nature of its text shows that it belongs to the α family, but the later date of S (11th cent.) means that its text has ‘degenerated’ and resembles in some particulars the text of β manuscripts. 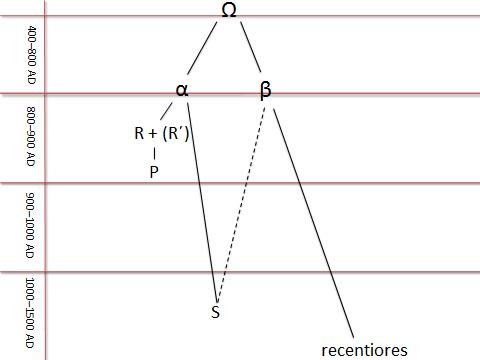 A discovery and further research were soon to complicate this rather simple reconstruction of the tradition. It was not long after the appearance of the first edition of Kenney's OCT that Munari (1965) first called attention to the Hamiltonensis (Y), which hitherto had been ignored. (Credit for the rediscovery belongs to Helmut Boese.) Because of a cataloguing error, which dated Y to the 14th century, neither Munari nor Kenney had taken Y into account in their editions.
The accession of Y to our knowledge about the tradition has had two important results. First, Y is a valuable independent textual witness—better than S and just as valuable as P. Second, and equally important, Y made obvious the ‘fog of unknowns’ that still envelops a large mass of the tradition. With Y in the picture, there were now two manuscripts of the 11th century—but their texts were quite different from each other. Y was not a “depraved” representative of the α branch, as S was believed to be. Y had its own authority, offering readings now in agreement with α, now with β. It even had authoritative readings not found anywhere else (most notably, Am. 1.10.30, licenda).
The arrival of Y served as reminder of something else: the tradition is not bifid, though it has been represented as such. The division into two major branches of transmission (= a bifid stemma), corresponding to earlier and later groups of medieval manuscripts, is a convenient means to organize the tradition, but the reality is quite different. Y had shown that the dates of the manuscripts did not closely correspond with the nature of the texts that they offered. A good reading—a good reading attested nowhere else—could appear in a later manuscript. It had happened in the case of Y, and there was nothing to say it could not happen with a β manuscript. The β manuscripts vary widely in date and their relationships to each other have not been traced out, and for good reason: they are not a closely connected group. They are not one family, but amount to an intertanglement of many individual families. Kenney appreciated the complexity on the β side when he characterized β as a “convenient fiction” (1962:25). Later, he shrewdly observed (1974:134) that it would be more accurate to refer to the β branch as ‘non-α.’ The idea is that, whereas the α manuscripts are manifestly related, the β manuscripts do not derive from a single ancestor; their membership to the same group is solely by virtue of the fact that they do not derive from α.
Reconsideration of P’s relationship to R has added a further wrinkle to the tradition’s history. D. S. McKie (1986) forcefully argued that, contrary to what had been thought, P does not derive from R. Belief that P was copied from R came about through a tentative suggestion made by Tafel (1910) that eventually was taken over as fact; decades later Goold (1965) corroborated the idea. Because P’s text of the Amores begins precisely where R’s text goes missing it was assumed that the scribes of P must have taken this portion of R to serve as their exemplar (model). Furthermore, the date of P, which had been set as ‘late 9th or 10th’ century, is earlier than often supposed. As was demonstrated by B. Bischoff (1961), P belongs to a group of manuscripts copied at the French monastery of Corbie in the period 850–880 (see Huelsenbeck 2013). R, P, S, and Y are all independent witnesses to α.
Therefore, recent developments in the study of the textual transmission of Ovid’s Amores yield a more intricate, dynamic, and open-ended stemma. This stemma attempts to reflect the current state of our knowledge, showing what we know and do not know. 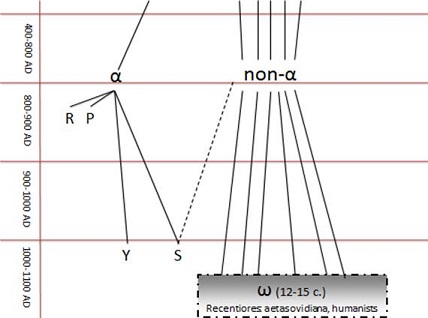