Portraits of Ptolemy II and Arsinoe II (The Gonzaga Cameo) 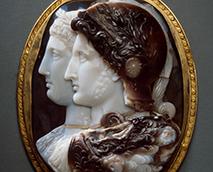